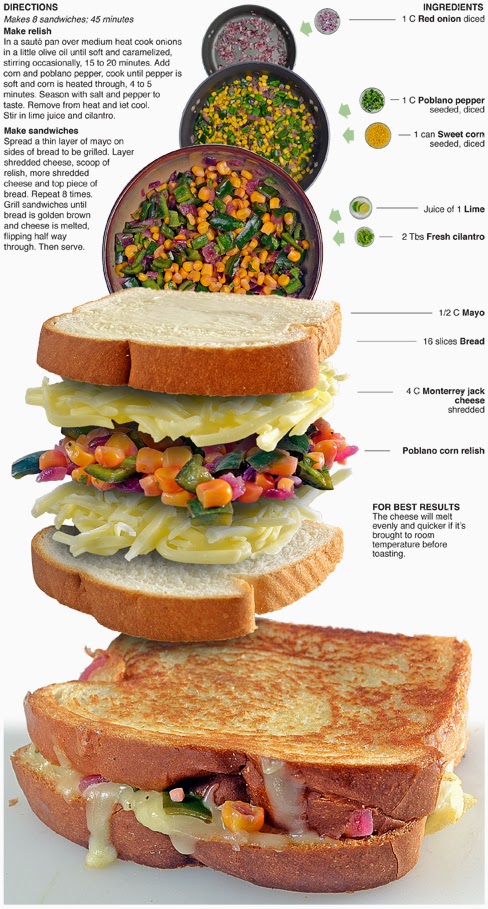 I made this sandwich to go with my spicy chipotle tomato soup. It needed balance and a grilled cheese is perfect for that. The soup included poblano pepper in the mirepoix and I thought it would be nice to tie the sandwich to the soup by including poblano in a relish to go on the sandwich.

Along with the pepper, the relish also features caramelized onions, corn, lime and cilantro, which combine to provide the southwestern element to the grilled cheese. The relish would be a nice accompaniment to a steak or make a nice side dish in general. I use shredded Monterrey jack cheese rather than slices so that the relish and cheese would melt together like pizza toppings inside the sandwich. I’m sure slices would been just fine, but I knew the shredded cheese would guarantee the gooey binder I was looking for.

This was the first time I had tried a relish mixture inside of a grilled cheese. Overall it worked really well, adding flavor and giving extra texture to the sandwich. I dipped this into the soup and gobbled down two by myself, which probably suggests that I liked the final product.

BEHIND THIS BITE
I have been reluctant to do sandwiches for the blog out of pure laziness. The layer by layer breakdown is a lot of work to create, so initially I tend to grimace when I think of creating a sandwich here, but in this case I absolutely had to. The tomato soup needed a grilled cheese to complete its culinary destiny. I could find a simpler way to present it, but to stay true to the overall style and presentation of my recipes, the layer by layer stack is the most effective to present a grilled cheese.

This is the best layer by layer presentation so far. My best effort before this was a patty melt back in April. After putting this together I realized it wasn’t as much work as I had thought, so I hope to do unique sandwiches here at the blog a little more often.

Make relish
In a sauté pan over medium heat cook onions in a little olive oil until soft and caramelized, stirring occasionally, 15 to 20 minutes. Add corn and poblano pepper, cook until pepper is soft and corn is heated through, 4 to 5 minutes. Season with salt and pepper to taste. Remove from heat and let cool. Stir in lime juice and cilantro.

Make sandwiches
Spread a thin layer of mayo on sides of bread to be grilled. Layer shredded cheese, scoop of relish, more shredded cheese and top piece of bread. Repeat 8 times. Grill sandwiches until bread is golden brown and cheese is melted, flipping half way through. Then serve.
Posted by behindthebites@gmail.com at 5:59 PM