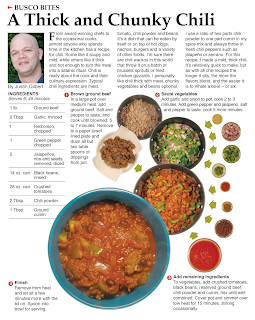 The most unhealthy chili dish I've ever come across was the invention of my Dad. Last summer I saw him fry potatoes, spread them on a plate and then dump a can of hormel chili on top. Tasty yes. Healthy No. It is a culinary spectacle I am glad to have witnessed but at the same time HORRIFIED to have witnessed. Thank God Mom does the lion's share of cooking in their house.

CHILI IS CREATIVE
This recipe was fun to create. It's one version of a dish that nearly every cook has their own versions of. Chili is versatile, and, as I elude to in the introduction of the column, it's an artistic culinary statement, an expression of the cook and the cook's interest in flavors. There are millions of chili recipes because there are millions of cooks. Red Chili, white chili, green chili, gray chili (for the not-so-good cooks) -- the list goes on and on.

I make chili several different ways. This chili is a my mild, thick and quick version. It can be eaten in a bowl, but because of its thickness it also makes a good chili topping for dogs or nachos – even pizza. Just throw it on a pre-made crust with some taco sauce and cheddar cheese - oh wait. That's for a later recipe.

I chose to add beans to this chili. Usually I don't, but I wanted this version to go a little farther and be a larger amount. It's much cheaper to "beef" up chili with beans rather than another pound of beef.

COOKING TIME
How do you know when chili is done? It's a big question for many cooks. I think it depends on the ingredients. For this recipe, the cooking time is quick. I do this so some of the vegetables retain a slight crunch and individual flavor. If chili is spiced based without the chunky vegetables and more "soupy" you would want the pot to simmer for a while, so that all of the flavors blend and become one flavor, Traditionally, that is the way chili is created. There are chunks of meat or beans but every bite has a well developed flavor that is the same. The chili in this recipe provides hints of green pepper, onions and beef because it isn't cooked very long and some of the ingredients retain their individuality.

THE LOOK
This is my second recipe using a colorful dish for the final plate. I love the turquoise blue bowl against the red chili, with green pepper accents. I'm impressed with how the dish ads to the visual presentation. I wish I would have started using colorful dishes earlier – it's just a great detail, and I'm obsessed with the details.

A GREAT PARTY DISH
I hosted a party this weekend at my aunt's house so that my family could meet my girlfriend. I decided to make chili and cheesy bread, the last two recipes featured in my weekly column. To make the chili go further I tripled the ingredients and added 4 cups of water. For the cheesy bread I left off the tomato and fresh basil and topped it with just the compound butter and mozzarella cheese. I also tripled the ingredient list. Both were a hit (along with my girlfriend).

I was happy that the dishes turned out so well -- especially for feeding such a large group. Sometimes when you create a recipe in bulk it takes away from the overall taste of the dish, but the bread and chili worked very well for feeding 25 hungry members of my family.

FOOD FOR THOUGHT
Chili maybe the most popular dish to have a country of the same name. I've never cooked a pot of anything called Mexico or Australia ...

Until next time. Cook often and eat well ...
Posted by behindthebites@gmail.com