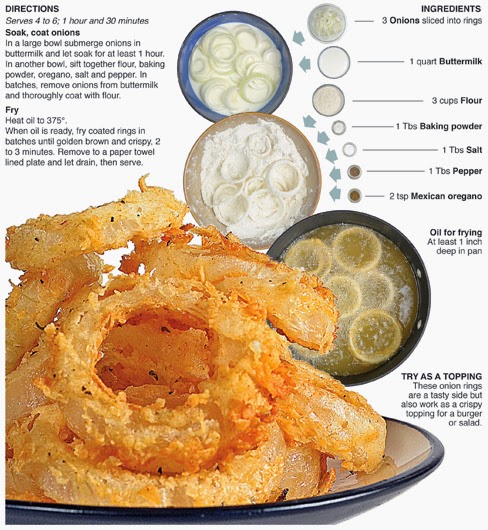 There are many in the culinary world who believe the onion ring was invented by a Dallas, Texas-based restaurant chain named the Pig Stand in the 1920s. But there are numerous recipes for batter dipped and fried vegetables, including onions, in American cookbooks published before the 20th century ever began, according to the The Oxford Companion to American Food and Drink. The Pig Stand is most likely the first retail outlet to serve the crispy fried treats but almost certainly not the true origin of the recipe.

Most onion rings have a thick crispy breading resulting from being dipped in a batter and fried. For this recipe, I went a different route. I treat the onions much like chicken, first soaking them in buttermilk, then dredging them through seasoned flour right before putting them in hot oil for a warm bath to cook them through. The end result is a light, crispy coating surrounding the star of the show – a sweet and delicious ring of onion.

BEHIND THIS BITE
Onion rings change from cook to cook and restaurant to restaurant, but most are served with a thick and heavy breading that will often dominate the flavor of the entire bite. Beer breading is a famous preparation for onion rings and often I find the flavor of beer too strong. I’m a purist when it comes to beer, I like the flavor of it all alone, as it’s being poured directly on my taste buds.

Beer is added to batter because the carbonation gives it a lighter, airier texture and the beer is often a prominent flavor in the final bite. I actually like using seltzer water when making batters, because it provides the same light batter as beer, minus the beer flavor.

The onion rings in this recipe just completely avoids the whole batter thing in general. I have made onions this way before, the difference this time is that I left the rings whole. In the past I have used onion strings, because they were only intended for a topping. Whole rings allow these to be a side to a steak or sandwich rather than just a topping.

Soak, coat onions
In a large bowl submerge onions in buttermilk and let soak for at least 1 hour. In another bowl, sift together flour, baking powder, oregano, salt and pepper. In batches, remove onions from buttermilk and thoroughly coat with flour.

Fry
Heat oil to 375°.
When oil is ready, fry coated rings in batches until golden brown and crispy, 2 to 3 minutes. Remove to a paper towel lined plate and let drain, then serve.
Posted by behindthebites@gmail.com