A Grinder: The Original Toasted Sub! 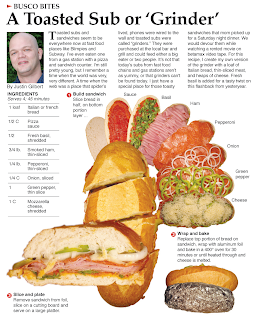 As I mention in the introduction to the column, I remember toasted subs from my childhood as "grinders." They were a staple of the take-out pizza places or local bars and grills. I loved them for the toasty bread and melted cheese - which is what sets it apart from a normal submarine sandwich.

I used to make a lot of these when I bought my car while living in New York City. In order to save a little extra cash to pay for the car, I would take my lunch to work. I could make a grinder on Sunday afternoon and have it for lunch a couple times that week.


THE COLUMN
I was not very happy with how the recipe turned out when it initially ran in the paper. I re-worked it for the blog. I replaced the art for the final stage, which is the dominant art - The platter behind the sandwich drowns out all the layers behind it. The new version removes the platter, allowing the layers behind to stand out a little. I went back through my original photos to get the sliced sandwich and cross-section for the improved version's final art.

It is the first time in 42 weeks that I have been so unhappy with the final design that I actually re-made it after publication. I am relatively pleased with how the final recipe turned out - especially how the sandwich is built layer by layer -- I just wish this was the version that ran in the paper.

FINAL THOUGHTS
Now that toasted subs are everywhere, including gas stations, I'm wondering how long it will be before McDonald's comes out with its own version called the McToasty.

Hey thanks man!! you are so good. I think this the perfect work.
Pizza Equipment