Potato Salad for the Next Cookout 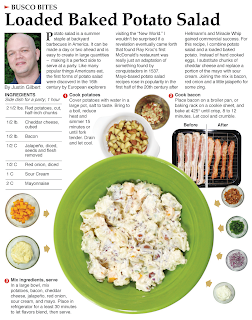 I have been waiting for summer time to create a potato salad. As I mention in the introduction, it's a staple of the classic American backyard barbecue. I needed one of my own.

When I started my research I found that most mayo-based potato salads call for eggs, celery, onion and usually a wild card ingredient that could range from a fresh herb to diced chicken or ham.

For my recipe, I took the elements of a loaded baked potato and substitute them for the basic potato salad ingredients. I swapped the egg for cheese, celery for jalapeno and part of the mayo with sour cream. The bacon was my wild card ingredient and I retain the onion. One of the keys to this recipe is that I used cubed chunks of cheddar cheese. When it's being eaten, you get large bites of potatoes AND the cheddar. Throw in the hint of bacon and ... Oh Man, please try this, you won't regret it.

THE COLUMN
Potatoes (and with them early forms of potato salad) where discovered by conquistidors in Central America in the 16th century, brought to Europe and then spread throughout the modern world. So many staple foods were found in the "New World" that I'm beginning to think that Medieval European cuisine must have consisted of grass and animals they could kill. I've researched a number of ingredients I eat on a regular basis and I'm amazed at how many can be traced to the Incas and Aztecs. Potatoes and tomatoes are two. I make a joke about this in the introduction, mentioning that McDonald's is just a derivative of something found by explorers in 1537. That year is actually the date attributed to the discovery of potatoes in the New World, not just a punch line.

THE DESIGN
I'm happy with the look. The recipe is very simple and it shows. Prep the potatoes and bacon, then mix it all together. The art for making the bacon is a first-time thing. I have never taken two shots and done a before/after mash-up for the column. I saw that technique used in Martha Stewart's Food Everyday. I'm glad to have been able to emulate it in my work. Hats off to the Designers/Art Directors at Food Everyday.

FINAL THOUGHTS
This recipe is simple. Any cook could make this – from novice to expert. Not all of my recipes have that going for them – some are just a little more complex than others. I'm always very proud of the simple ones. There is much less to work with, meaning you have to really challenge yourself and be creative.