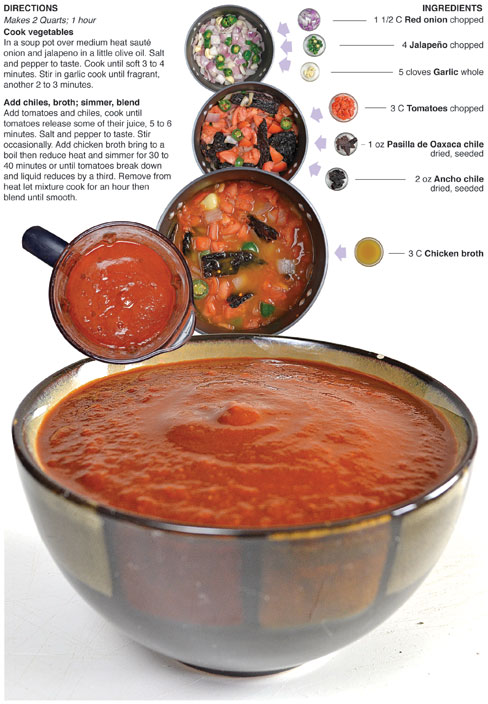 This recipe starts with onion, garlic and four jalapenos. The peppers are kept whole with ribs and seeds for that extra fire that they provide. I simply chopped each jalapeno into five or six slices and tossed it in the pot. Once the base has cooked a few minutes and starts to soften up I add the tomatoes and chiles.

I had never worked with the Pasilla de Oaxaca chile, it’s smoked and ads a meaty bacon or ham-type of flavor. I think it would be ideal for vegetarians to use to simulate a bacon flavor in soup - As long as they can stands the heat.

After the chiles have toasted and the tomatoes start to surrender some of their liquid I add the chicken broth. It's all brought to a simmer and let go for at least a half an hour – or until it has reduced some.

Before transferring it to a blender, I took it off the heat for a while just to let it cool – I think it is a bit easier to work with when it’s not as hot. The mix is blended for a minute or two, just long enough so that everything is liquefied into a smooth and silky sauce. That's all it takes - now it's time to slather it on your favorite type of taco! 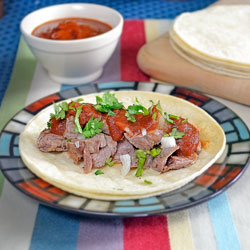 I actually made much more than what I thought I would be making for this batch - about 2 quarts - which is enough for about six thousand tacos. All I needed was enough for 12. I ended up giving a couple of bottles away.

I decided to make this hot sauce to get rid of some dried chiles I had left in the pantry. About a year ago Greg Patterson form the online spice store SpicesInc.com sent me a number dried chili samples to try. I had used most of them but had a few left so I decided to use them for a taco sauce. I am going get more of the Pasilla de Oaxaca chile in the future. It has a smoky flavor like a chipotle but it also has a meaty quality to it as well. As I mention in the introduction, it would be a good chili for vegetarians to use.

I thought that four jalapenos would really add some fire to this sauce but to my surprise, it was rather mild for my taste. But then again, my mild is another man’s hellfire - as most of my relatives would say. 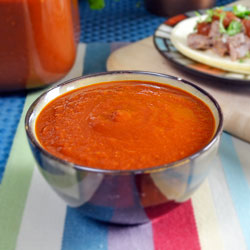 Cook vegetables
In a soup pot over medium heat sauté onion and jalapeno in a little olive oil. Salt and pepper to taste. Cook until soft 3 to 4 minutes. Stir in garlic cook until fragrant, another 2 to 3 minutes.

Add chiles, broth; simmer, blend
Add tomatoes and chiles, cook until tomatoes release some of their juice, 5 to 6 minutes. Salt and pepper to taste. Stir occasionally. Add chicken broth bring to a boil then reduce heat and simmer for 30 to 40 minutes or until tomatoes break down and liquid reduces by a third. Remove from heat let mixture cool for an hour then blend until smooth.
Posted by behindthebites@gmail.com at 9:29 PM