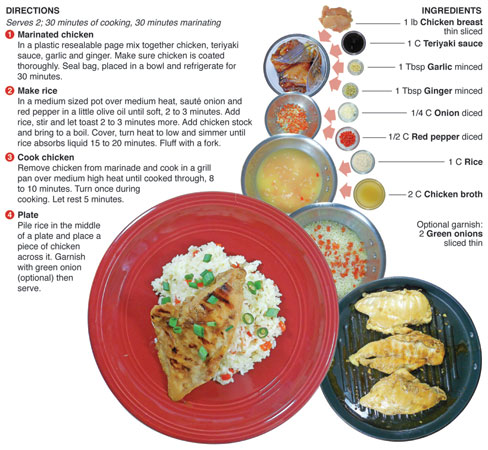 There is an old saying that "the way to a man's heart is through his stomach." I believe that saying was coined by women who were projecting their own feelings, because there are few things a man can do that are more powerful than to surprise his love interest by preparing her a home cooked meal.

Cooking can be the best Valentine's Day present and for this recipe, I create a simple but elegant dish featuring Asian flavors. The chicken is marinated in teriyaki sauce, ginger and garlic and the rice features sautéd onion and red peppers. It takes about an hour for it all to come together and it is well worth the effort. So guys, remember this - one way to a woman’s heart is definitely through her stomach. 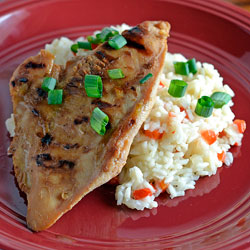 BEHIND THIS BITE
There are few things I know about females, but being blessed with good culinary skills has allowed me to discover how much women appreciate great cooking. I can’t tell you how many times I’ve been told “I love a man who can cook” by my female acquaintances.

This became evident when I would host football parties at my man cave in New York. There were a number of occasion when the guys interested in the actual games were out numbered by the females who were there because of the food. On the night of Super Bowl XLIV, I was actually told this. I opened the door to let a friend in and she literally said “I could care less about the game, I’m here for the food.” Later that night I found this same friend using tortilla chips to finish off leftover sauce I had made for a pizza! (that sauce can be found here)

While females will remain mostly a mystery to me, one thing is for sure – if your out to impress one, cook up the best dish you can make – and, oh yea, make sure you take a shower!

Posted by behindthebites@gmail.com at 11:17 AM