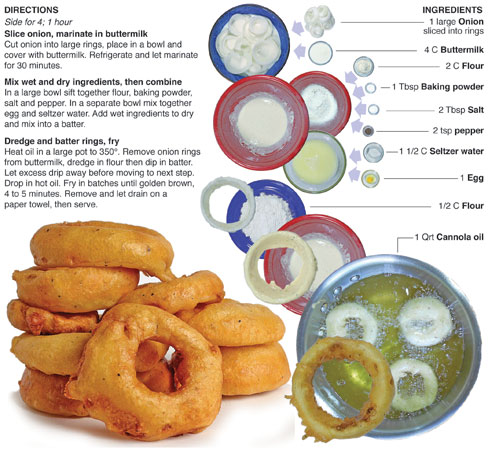 When we were kids, my sister used to eat raw onions like they were apples.
She would keep a sandwich baggy in the refrigerator with a peeled raw onion in it, every so often she would take out her pungent little treat and sink her teeth in for a huge bite to chew on. It was a spectacle on par with watching a circus freak swallow a sword. Her breath would reek of onion so bad it would make eyes water and flowers wilt.

I love onions – not so much I’ll eat them raw like an apple – but enough to use them as a base flavor in almost every dish I make. When it comes to eating large pieces of onion, I prefer them breaded and fried so they’re sweet and crunchy.

For this recipe, I make onion rings that are marinated in buttermilk, dipped in batter and deep fried. The coating for these onion rings is thick, fluffy and hardy – just a few are enough to make a great side for any sandwich. I’m sure my sister will approve of this onion ring as much as the raw ones she devoured when we were kids. 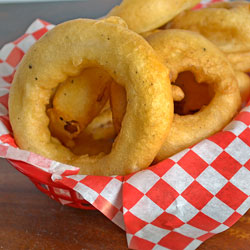 BEHIND THIS BITE
When I was kicking around the idea of writing about my sister’s unusual taste for raw onion for the print column this week, I told my uncle about it. Instantly he perked up and said, “Onions were just one thing. She would go into the garden, pluck a vegetable out of the ground and eat it like candy.” I was surprised by his response. It was immediate, and he said it with genuine amusement. Not only was I amazed by my sisters eating habits when I was a kid but so were the adults at the time.

She doesn’t eat anything off the wall or out of the ordinary today, but I wonder if she ever gets the urge to eat raw onions.

Her kids have some unusual eating habits – they love sardines. I don’t know if that is unusual for 6 to 10-year-olds but they do seem to go bonkers when Grandpa breaks out a can with some crackers to snack on. I have yet to acquire a taste for sardines and I don’t know if I ever will, I think I’d rather take a bite of a raw onion.

Email ThisBlogThis!Share to TwitterShare to FacebookShare to Pinterest
Labels: batter, fried food, side