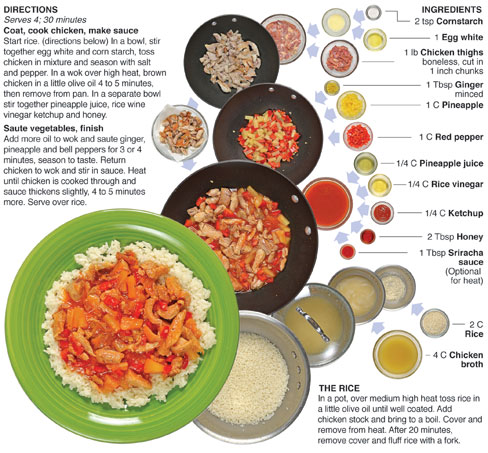 I have started a new culinary adventure.

Recently, I was introduced to John Maxwell, a New Orleans Chef who was forced to relocate to Fort Wayne after Hurricane Katrina. He currently cooks at the Shiloh reception hall and is in the process of starting a food truck called “The Ragin’ Cajun.” The truck will deliver the cuisine of New Orleans to Fort Wayne and the surrounding areas.

John was in need of help at the hall and with the truck. After meeting with him at the Shiloh, I was asked to come aboard to assist him with the cooking and to help create an on-line social network for the Ragin' Cajun.

For this recipe, I create my own version of sweet and sour chicken over rice – the first dish I helped John prepare for a reception a couple weeks ago. It was intended for 160 people, so it was created differently at the Shiloh. This is a version for four that contains some heat from sriracha hot sauce. It’s the first of hopefully many creations inspired by this new adventure. 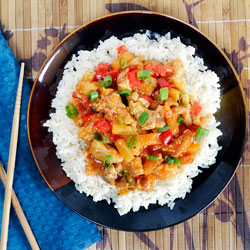 BEHIND THIS BITE
A little over two years ago I left New York City and the world of journalism to create a business for myself. A once in a lifetime opportunity that at the very least would allow me to sit back when I’m an old man and say “This is what I did” instead of “This is what I could have done.”

This blog featuring over 100 original recipes, 20,000 words, 1,500 photographs and a print column that has ran every week for the last two years is what I have built. At the very least I have written a how-to cookbook with a stunning visual presentation of my food and the story behind it.

In Early June, my cousin approached me with a card and an application. He said the Chef at the Shiloh was looking for some help. He wasn’t sure what “help” meant but he gave me assurance that these were solid people and I should at least go talk to them because he felt like I could offer some good services to them.
The card he gave me said “Ragin’ Cajun Food Truck - John Maxwell - Chef/Owner.” I thought what the hell. Cool concept for Fort Wayne. I’ll at least give the guy a call.

A few days later I called John, his Bayou accent was clear and authentic, and I agreed to come have a look at the Shiloh and his food truck. He didn’t have a job description, but told me if I would check the place out he could explain it better.

When I went to meet John at the Shiloh, he first showed me the set up inside. Great space for cooking, lots of equipment, very clean and in general, a nice place. He then showed me the truck, which hadn’t been painted yet, and he talked to me about his menu and plans. The truck was a dream kitchen on wheels. char broiler, griddle, fryer, stove ... It’s loaded.

John is a native of New Orleans, and a true character. It was evident right from the get go. He reminded me of my old buddies back in Whitestone, Queens in the borough of New York City. I liked him right away. *1

We went back to the office of the Shiloh and talked for a while, at that time Jeff Parrot, the owner joined us. He had been looking at this blog while me and John were inspecting the truck. The Shiloh is primarily a family run business, at a reception, you’ll find Jeff’s wife pitching in as well as the kids. Jeff is a genuine guy with an entrepreneurial spirit who seems open to new ideas.

We sat and talked about the possibilities of the food truck and the Shiloh, I told them my story. We agreed that we might be able to help each other business-wise with the different resources we all bring to the table. Since then, I have worked a couple of reception helping John cook and started a website for the Ragin’ Cajun Food Truck. (Which now has an awesome paint job.)

We’ll see where it goes from here. As I said in the introduction, It's a new culinary adventure. Can’t wait to see where it takes me. 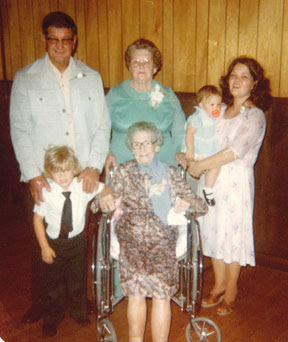 The picture at right is (from left counter clockwise) my mom holding my sister, great grandma, grandpa, me and my great great grandma. Five generations. Taken in September of 1979 at the Shiloh, during my great grandparents 50th wedding anniversary party. I was 5.

*1 - NOTE
In the Big Apple, as I am sure is the case with New Orleans (The Big Easy), you have to be a character if you want to survive and have any kind of success. In smaller places, it’s much safer to fit in with the crowd rather than to stand out. Not the case in New York - You fit in BY standing out, which brings more of people’s true character to the table, but ironically, makes them appear to have a tougher exterior.

Big John, the Ragin' Cajun, is definitely a character.