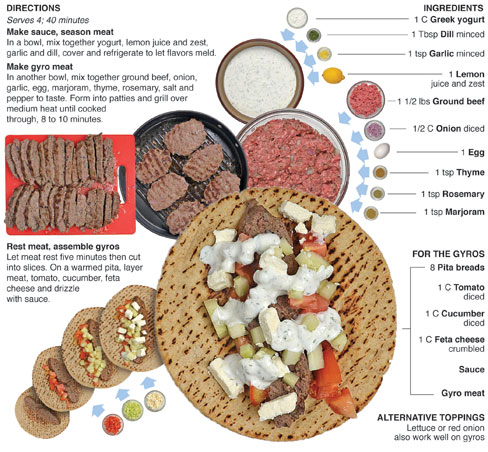 New York City might be the capital of mobile food. The hot dog carts are famous but that is just the most basic food stand on the sidewalks of the Big Apple. Nearly every type of cuisine imaginable can be found on a mobile kitchen somewhere within the five boroughs.

I lived in the Astoria section of Queens for more than 12 years and there was one cart in particular that was there when I arrived in 1997 and is probably serving food right. The cart specialized in gyros, kabobs and other Greek and Mediterranean foods. I must have eaten 300 gyros from that place and probably paid the light bill for the guy who set up, took down and cleaned his food cart night after night at the corner of 32nd and Broadway in Astoria.

For this recipe, I make a homemade gyro. I replace lamb with beef and use a few Mediterranean spices to enhance the flavor of the meat. It’s topped with feta cheese, tomato, cucumber and a sauce that is a simple version of the tzatziki sauce found on traditional gyros. 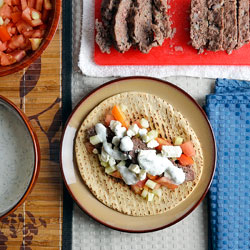 BEHIND THIS BITE
I loved the street food in New York and the vendor I mention in the introduction was one of the many that I frequented while living in the Big Apple. While New York has had street vendors for decades, it’s great to see it finally coming to this area.

The street food or food truck movement has hit Fort Wayne and several carts and trucks run by good chefs have popped up around the Summit City. I admire these entrepreneurs, because they are really taking a chance with the concept. Most people in the midwest associate mobile food with carnivals and festivals and consider the cuisine “a guilty pleasure,” with products loaded with calories like elephant ears, cotton candy and fried snickers.

That’s not what these guys are serving. I went to the grand opening of the Ragin' Cajun truck last week and the food was absolutely amazing. I have been working with the Chef, Big John for a few weeks now. I have cooked with him at the Shiloh reception hall and had tasted his cooking for large wedding parties (which was outstanding), but the cuisine John was whipping up on the truck was truly his comfort zone.

I had a blackened shrimp taco and Jambalaya. The taco was high-end, as good as any cuisine found at any restaurant in town. The shrimp was succulent and spicy but the heat was was tempered by a creamy cilantro-lime sauce that balanced the flavors perfectly.

Then there was the Jambalaya.

It tasted as if someone had been brewing it up on the stove all day. There were so many layers of flavor from the sausage and chicken, fresh herbs, tomato sauce and perfectly tender rice. I could have eaten an entire bucket.

Overall, the taco and jambalaya was the best meal I’ve purchased in Fort Wayne all summer and I look forward to eating from the Ragin Cajun’ again.

I hope all the trucks popping up stay true to providing gourmet cuisine, because if one starts frying Twinkies and snicker bars it might taint the reputation of the trucks in general and that would be sad for the owners. Big John has a legitimate restaurant on wheels and he has the chops to provide some of the best food in town. I hope all the trucks can live up to the kind of standard that John is setting with his cuisine.

In the coming weeks you will here more from me about the food being served from the different trucks and mobile food vendors in Fort Wayne's growing mobile food movement.

Make gyro meat In another bowl, mix together ground beef, onion, garlic, egg, marjoram, thyme, rosemary, salt and pepper to taste. Form into patties and grill over medium heat until cooked through, 8 to 10 minutes.