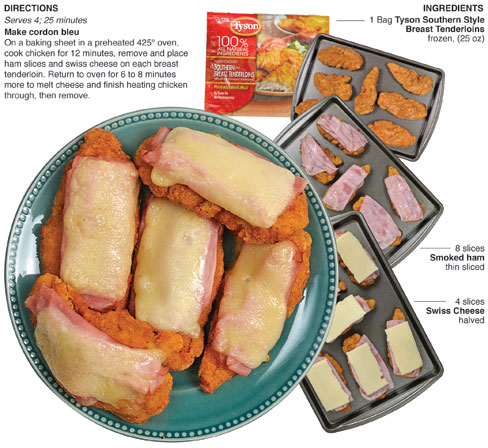 College is back in full swing. Class schedules are becoming routine, papers are being drafted and beer is being guzzled by the gallon. Every so often I like to take simple items from the store and make something special and quick.

This recipe, easy crispy chicken cordon bleu, is as quick and simple as it gets. It takes twenty five minutes and requires no cooking skill except for the ability to operate a conventional or toaster oven. It’s the perfect snack for a busy college student who wants a little more than ramen noodles and has only a short time to eat between classes. Any breaded chicken breast works here, but in this case I use Tyson’s Southern Style Breast Tenderloins that are fully breaded and cooked and can be found in the freezer isle of just about any grocery store. I was impressed by the chicken, it had great breading that packed a mild spicy kick.

Last week, the folks over at Top Ten Online Universities posted “6 Grocery Store Staples for the Busy College Student” and I thought this recipe was a nice compliment to the post. We both agree that one college staple is beer. There is no time better in life to work hard and play hard. (Just as long as you play safe) 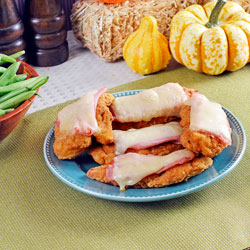 BEHIND THIS BITE
I worked a reception recently with Big John Maxwell (aka The Ragin’ Cajun) and one of the items being prepared was chicken cordon bleu for 250 people. To save time the chicken tenderloins were left whole and were breaded, the ham and cheese topped the chicken instead of being stuffed inside. It was a smart and efficient way to make a serving of a difficult dish to create for that many people.

I also thought it was a great way to make a lunch or even sandwich when time is an issue with frozen breaded chicken. It has all the traditional flavors, it is just doing it quick. A real chicken cordon blue is hard to make and actually requires some technique. This recipe is the easy college version inspired by the catered version.

THE RECIPE
Main dish for 4; 25 minutes

On a baking sheet in a preheated 425° oven, cook chicken for 12 minutes, remove and place ham slices and swiss cheese on each breast tenderloin. Return to oven for 6 to 8 minutes more to melt cheese and finish heating chicken through, then remove and serve.
Posted by behindthebites@gmail.com