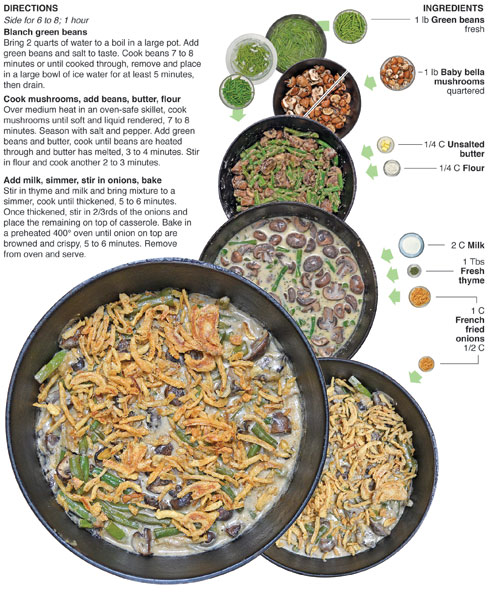 Green bean casserole is one of my favorite Thanksgiving dishes. This year I went a little nutty and decided to make it from scratch. The fresh mushrooms are the biggest difference. Frozen or processed green beans are close in flavor to fresh picked and blanched, but the mushrooms in a can of Campbell's Cream of Mushroom Soup have nothing on fresh baby bellas.

Going the fresh route provides big juicy and flavorful bits of mushroom which are complimented here by the addition of fresh thyme. Everything is bound together with a fresh cream sauce made from a roux. I could have went all out and made the french fried onions from scratch too, but this wasn’t the only dish I was making and the store bought onions had to suffice.

It really didn’t matter though, the fresh mushrooms were the star of the show and really helped kick this thanksgiving classic up a notch or two. 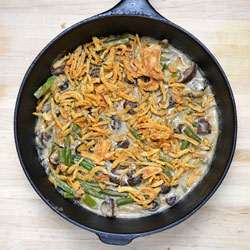 BEHIND THIS BITE
I made this casserole in two stages. When I started it, I got to the point of adding the french fried onions and I thought that I had messed up the cream. (More on that in a moment) I quit on the recipe, let it cool and then put it in the fridge to be eaten later.  I didn't think I would be publishing it here at that point.

The next afternoon when I fried a turkey, I added the french fried onions, heated it up, then topped it with more onions and browned them. It tasted great and provided a big surprise.

The cream that bound it all together was much thicker than I thought it was the night before and was why I quite on it. I didn’t pour off any of the liquid from the mushrooms and I added the beans before the flour which made the cream too runny, or so I thought. The next time I make this I will drain the extra liquid and create the cream before adding the beans. Although this recipe has flaws, it still made for a tasty thanksgiving side dish that will be good on any table, which is why I decided to share it.

I am very critical of my work and many times it is tasting the leftovers or returning to it later (like this recipe) that I surprise myself. I knew the flavors would be there, which is why I saved it to be eaten with the turkey. Good thing I continued with the documentation the next day.

Blanch green beans
Bring 2 quarts of water to a boil in a large pot. Add green beans and salt to taste. Cook beans 7 to 8 minutes or until cooked through, remove and place in a large bowl of ice water for at least 5 minutes, then drain.

Cook mushrooms, add beans, butter, flour
Over medium heat in an oven-safe skillet, cook mushrooms until soft and liquid rendered, 7 to 8 minutes. Season with salt and pepper. Add green beans and butter, cook until beans are heated through and butter has melted, 3 to 4 minutes. Stir in flour and cook another 2 to 3 minutes.

Add milk, simmer, stir in onions, bake
Stir in thyme and milk and bring mixture to a simmer, cook until thickened, 5 to 6 minutes. Once thickened, stir in 2/3rds of the onions and place the remaining on top of casserole. Bake in a preheated 400° oven until onion on top are browned and crispy, 5 to 6 minutes. Remove from oven and serve.
Posted by behindthebites@gmail.com