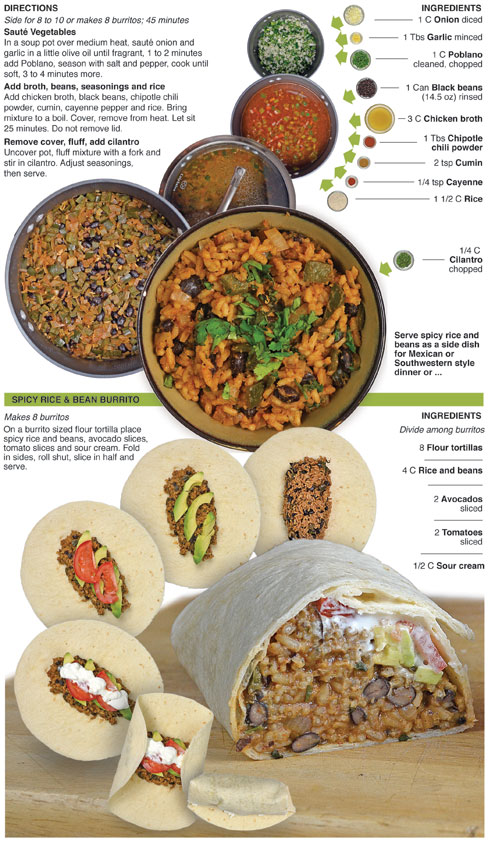 When I set out to make this dish I was looking to create a spicy side. The batch was large enough for an alternative use though - burrito filling. So I decided to present it as both.

What I love most about this dish is how the rice absorbs the flavors. I have been cooking rice in chicken broth rather than water for years, it ads a ton a flavor. The rice here has not only chicken broth but chipotle, cayenne and a nice vegetable base as well.

I start the dish off with what I call my a southwestern mirepoix, which consists of onion, poblano pepper and garlic. It's a great flavor base that creates nice depth in the finished dish.

I have to say, I enjoyed this more in a burrito rather than by itself as a side. I like how the sour cream and avocado provided a cool balance to the spicy heat in the rice.

This can easily be made vegetarian by replacing the chicken broth with vegetable broth - making it great for those who choose not to savor the yummy goodness created when heat is applied to parts of animals who are now grazing in the great pastures above. 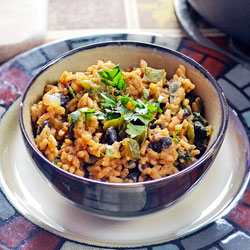 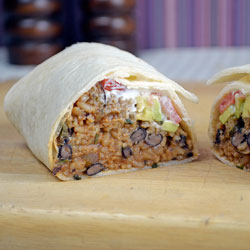 When I originally made this dish I had to much cayenne pepper. The first batch was blow your mind hot, I needed a little sour cream on top to eat it as a side dish, so I dialed it back to a quarter teaspoon.

I learned a lot about rice creating this recipe. I love how it absorbs the flavors in the liquid it's cooked in. It was really my first attempt at a Spanish rice-type dish. In the future, I’m going to play with different flavors in the liquid for different styles of rice. I think it would be easy to make a Cajun-style or Italian-style rice, it would just be about finding the right combo of vegetables and spices to give it an ethnic flare.

Sauté Vegetables
In a soup pot over medium heat, sauté onion and garlic in a little olive oil until fragrant, 1 to 2 minutes add Poblano, season with salt and pepper, cook until soft, 3 to 4 minutes more.

On a burrito sized flour tortilla place spicy rice and beans, avocado slices, tomato slices and sour cream. Fold in sides, roll shut, slice in half and serve.
Posted by behindthebites@gmail.com at 6:56 PM