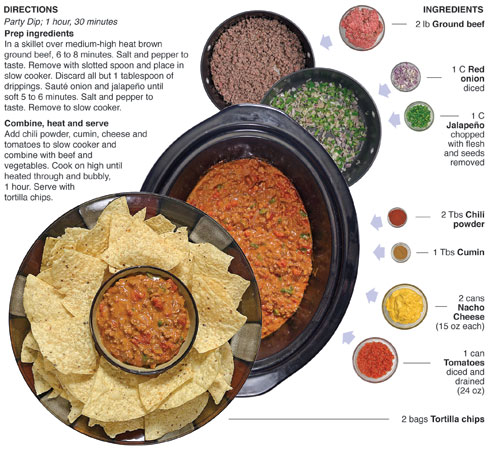 Another Super Bowl is upon us. The big game has become an unofficial holiday in America, bringing together millions to watch two teams compete for the championship of the NFL. The Super Bowl has something for everyone, if you’re not a fan of football then there’s the commercials and star-studded entertainment.

For me, not only is it the biggest game of the year, but it’s a day to showcase my best party snacks, which is also my favorite type of cuisine to cook and eat. What I love about this type of food is the variety of bites and flavors that can adorn one plate. A good Super Bowl spread should look like a parade of appetizers that will provide hours of snacking. This will create a good base for hours of drinking – or praying – after all, the game is always played on Sunday.

For this recipe, a huge helping of ground beef is smothered in nacho cheese, spices and sautéd vegetables. It’s then heated through in a slow cooker, creating a batch of beefy nacho dip big enough to feed a party. 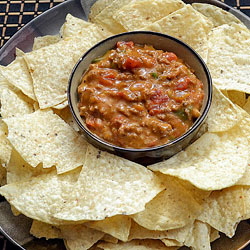 BEHIND THIS BITE
I am really looking forward to Super Bowl XLVII. It’s the first year in a while that I’m not emotionally invested in the game in one way or the other.

I am a huge Colts, Peyton Manning and whoever is playing the Patriots and Steelers fan.

That said, I have had a real reason to root for one team or the other for the last decade. Some games have been euphoric, the Colts triumphant win in Super Bowl XLI and The Giants destruction of the Patriots perfect season the following year were two amazing highs. The night the Colts lost to the Saints in SB XLIV was a devastating low.

This year, there is no Tom Brady, Ben Rothlisburger or Peyton Manning to sway my fandom. I can set back and just hope for a great game. Will the Raven’s Ray Lewis go out on top or will the young Colin Kaepernick from the 49ers make a mark on the game for the new type of running QB that seems to be emerging around the league.

I hope it’s a game for the ages. 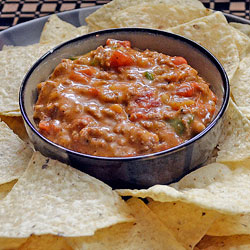 Combine, heat and serve
Add chili powder, cumin, cheese and tomatoes to slow cooker and combine with beef and vegetables. Cook on high until heated through and bubbly,
1 hour. Serve with tortilla chips.