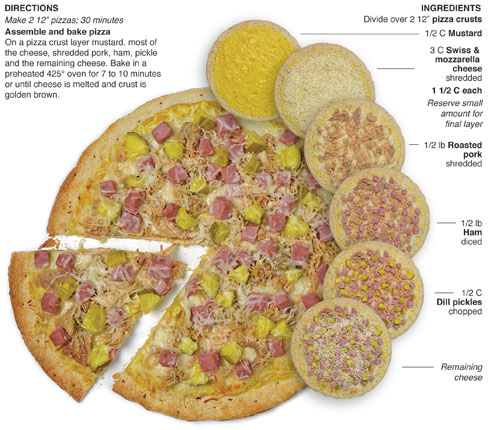 Unfortunately, they are not as prevalent on menus here in Fort Wayne, Indiana as they are in New York City, which has forced me to create my own several times since relocating two years ago.

After roasting a pork loin for a Christmas eve dinner I had a decent amount left over. As we were cleaning up I bagged the leftovers and instantly thought of making Cubans with it. Instead of making sandwiches I thought it would be fun to change it up and turn it into a gourmet pizza.

The pizza turned out magnificent.

The star of the show was the pickles. I chopped up dill spears to about the equal size of the cubed ham. The combination of the savory meat, tartness of the mustard and pickle with the creamy cheese made for a delicious experience. I mixed equal parts Swiss cheese with mozzarella so it would melt better, the Swiss alone wouldn't get as creamy. I will be making this again for sure. Most likely for a Super Bowl or football playoffs party in the next few weeks. 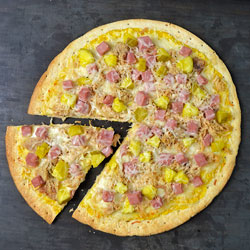 BEHIND THIS BITE
Every July when I lived in New York my Mom would come and visit for a week. She would always bring a friend so that they could explore the city during the day when I worked. I would usually meet them for dinner after I was finished. I liked taking them to different types of restaurants so they could experience different cuisines.

One of the places I took them was a small Latin place in my old neighborhood near the 36th Avenue stop of the N train in Astoria. We got there late and the place was about to close, but the manager said it was ok to order. Apparently the cook wasn’t pleased that we were going to keep them a little while longer. My Mom ordered a Cuban sandwich and when it came to the table she said there was way to much garlic on it. I thought she was exaggerating because she never eats garlic and just a little bit is to much for her. Any amount will turn her away because she has an allergic reaction to it, especially when it’s raw.

My mom is not one to complain about food especially after closing time, so she didn’t return it to the kitchen. She is a veteran of restaurants, having waited tables part-time for nearly 30 years and she will never trust a cook who ruined her order the first time. She did the smart thing and had the manager take the sandwich off the bill. They never took it away and we ended up boxing it up.

I hauled it to work the next day for lunch. I really thought it was just a special sauce or garlic bread that had turned Mom away, like I said, she can’t really eat any garlic. I heated the sandwich up and I noticed the heavy garlic smell. I took a bite and nearly puked. I bet there had been 10 cloves of raw minced garlic smeared on the sandwich – it was inedible.

Clearly the cook was pissed at us for making them stay late, thank God mom didn’t return it - I can only imagine what that bastard in the kitchen would have done then – and I hope he didn't do anything that went unnoticed to any of our other plates. I never returned to the place despite being only a block from my apartment.

Assemble and bake pizza
On pizza crust layer mustard, most of the cheese, shredded pork, ham, pickle and the remaining cheese. Bake in a preheated 425° oven for 7 to 10 minutes or until cheese is melted and crust is golden brown.
Posted by behindthebites@gmail.com