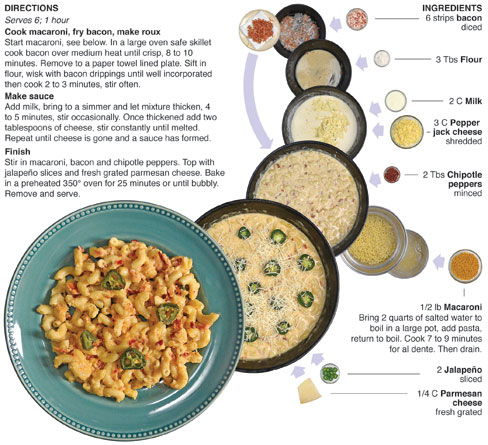 When I was 11, I used to love mac and cheese with sliced hot dogs, to me it was like gourmet sauce and pasta mixed with filet mignon. I could gobble down a bowl and ride my bike for miles through trails in the woods or go play second base in a little league double header.

At that age my palate preferred french fries, breaded chicken and the aforementioned macaroni with cheese sauce made from a packet of neon colored powder.

Vegetables started to taste better, I began to get nervous around certain girls and some of the clothes Mom wanted me to wear made me feel like a freak at school. Things have just become more complicated ever since. One thing that hasn’t – my love for mac and cheese. I prefer a more sophisticated version these days, but nothing says comfort  on a cold winter day more than a bowl of elbow macaroni smothered in cheese sauce – add some bacon and heat from chilies, and I’m just a kid in a candy store. 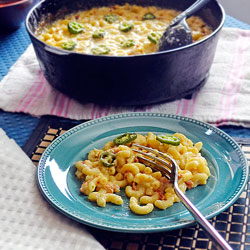 BEHIND THIS BITE
This is the second time I have made mac and cheese for the print column. The first time was a more traditional dish, made from scratch of course, but nothing out of the box creativity-wise. This time I went for it. The smoky bacon compliments the chipotle, which along with the pepper jack, provides the fire. 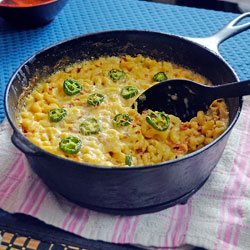 I really liked this dish, and to my surprise, so did my niece. The kids have not warmed up to the idea of spicy food yet. Thankfully she actually tried it, then she kept going back for nibbles - I was pretty excited about that. I’m hoping the kids grow up to be adventurous eaters. She wasn’t adventurous enough to eat one of the whole jalapeño slices that garnish the dish, but the fact that she liked it is a great. It’s a start - Uncle Justin will have her sampling some habanero salsa by the time she can drive. 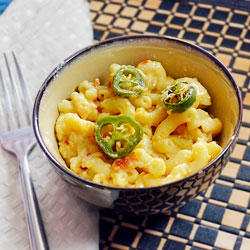 Cook macaroni
Bring 2 quarts of salted water to boil in a large pot, add pasta, return to boil. Cook 7 to 9 minutes for al dente. Then drain.

Fry bacon, make roux
After starting the macaroni, In a large oven safe skillet cook bacon over medium heat until crisp, 8 to 10 minutes. Remove to a paper towel lined plate. Sift in flour, wisk with bacon drippings until well incorporated then cook 2 to 3 minutes, stir often.

Make sauce
Add milk, bring to a simmer and let mixture thicken, 4 to 5 minutes, stir occasionally. Once thickened add two tablespoons of cheese, stir constantly until melted. Repeat until cheese is gone and a sauce has formed.

Finish
Stir in macaroni, bacon and chipotle peppers. Top with jalapeño slices and fresh grated parmesan cheese. Bake in a preheated 350° oven for 25 minutes or until bubbly. Remove and serve.
Posted by behindthebites@gmail.com

Hi there, just letting you know that you are in my Featured Food Blog sidebar for February on Carole's Chatter. Have a great week.

Thanks for linking this in to Food on Friday, Justin. Cheers