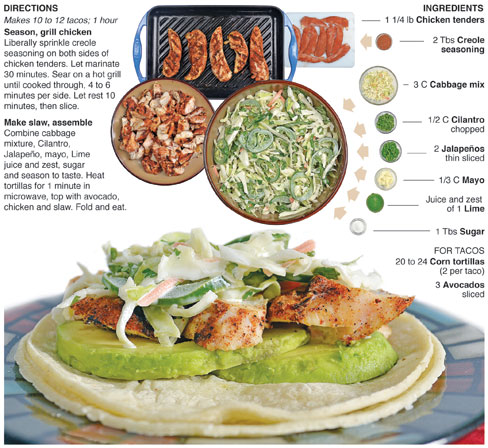 I made Creole seasoning last week that contained the peppery heat found in the cooking associated with New Orleans and the surrounding Bayou. I added cumin and chili powder also, giving it a hint of Southwest.

I used it to season chicken tenders that were intended for tacos. To continue with a Southern theme, I wanted to pair the chicken with a coleslaw. Like the Creole seasoning, I thought it would be fun to mix the South with the Southwest, and instead of vinegar as the acidic element in the coleslaw I used lime juice. To add heat, I sliced jalapeños paper thin on a mandolin and tossed them into the mix, followed by fresh chopped cilantro.

It resulted in a creamy, crunchy and spicy topping for the taco that complimented the peppery chicken. Just to take it over the top (and add extra creaminess) I threw in a couple of slices of avocado.

Any fan of gourmet tacos should try this recipe. I personally couldn't get enough. Beware though, these babies have some kick! 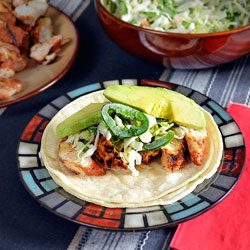 I pigged out on these.

I must have looked like a starving pit bull who had just discovered how to get under the fence of a busy chicken coup. I’m glad I ate these in the confines of my office and not in front of any family members, the kids would have been traumatized. These tacos have all the things I love about good tacos - heat, texture and a little messy. Not chicken wings messy, but definitely not an eat-while-driving type of dish.

The cilantro-lime and jalapeño flavor of the slaw really did compliment the peppery heat of the chicken. I worried they would compete but the combination worked, and I was proud enough to give this taco an official name.

The South by Southwest Taco 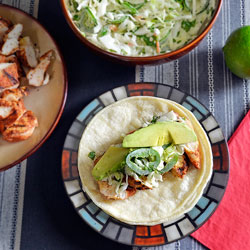 Season, grill chicken
Liberally sprinkle creole seasoning on both sides of chicken tenders. Let marinate 30 minutes. Grill until cooked through, 4 to 6 minutes per side. Let rest 10 minutes, then slice.