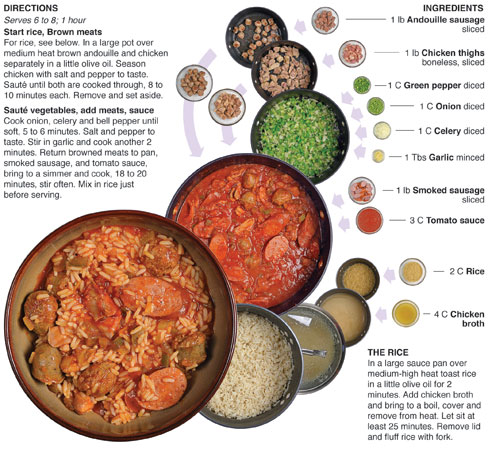 This is the second time I have made Jambalaya for for my print column "Busco Bites." The first time I made a “dry” or “brown” version, this time I’m making the “wet” or “red” version.

The difference between the two is in the tomatoes. The dry version features diced tomatoes, while the wet version features tomato sauce. I recently asked John Maxwell, New Orleans native and owner of the Ragin’ Cajun food truck about the different versions of jambalaya. He said the dry version was the Cajun version made in the rural areas surrounding New Orleans. The wet version is Creole, or the fancy style found in the city.

Jambalaya is traditionally a leftover type of dish, or what I like to call a “throw it in the pot before it rots” meal. Not here though. I went to the store with jambalaya on my mind.

For this recipe, I use andouille sausage, which provides most of the spice, smoked sausage and chicken thighs. All tossed together with rice, tomato sauce and the Creole holy trinity: celery, onion and bell pepper. 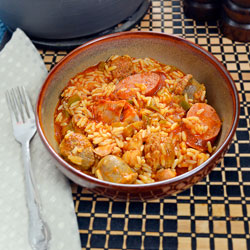 BEHIND THIS BITE
When I went out to buy the ingredients for this dish I went to a specialty meat shop in Fort Wayne to get andouille sausage. Most major retailers have andouille but it’s not really authentic - the spices are boulder and different but it’s just like all the other sausages in the meat case. I found the real deal andouille at Jamison Meats for $3.89 a pound and I couldn’t have been happier.

When I was ready to make the jambalaya I opened the package and the andouille had a peculiar smell - sweet and sulfury. The aroma was slight and it wasn’t a bad smell, but at the same time it wasn’t good. After the jambalaya was finished and ready to eat there was no hint of the smell, and the andouille was delicious and fragrant, the meat was just there to deliver a spicy and bold flavor. The next day I was researching jambalaya for the print column when I stumbled upon a description of real andouille sausage. I discovered it is traditional made of pig entrails!

After the pig has been butchered and cleaned of all the good meat there is a pile of stuff left, that is what gets made into andouille. The meat doesn’t mater, it’s doused with spice, they could put anything in there.

That was the sweet and sulfery smell.

I’m not adventurous when it comes to trying organs and guts of animals, the thought grosses me out. There is a big batch of leftover jambalaya with real andouille sausage in my fridge, it will probably get thrown out. I don’t have what it takes eat more of it. I will say this though, it was really good sausage, I just wish I would have discovered that it was made from pig guts after I had eaten it all.

I'll stick the Kroger andouille from now on, it's not traditional but it's good.

Start rice, Brown meats
For rice, see below. In a large pot over medium heat brown andouille and chicken separately in a little olive oil. Season chicken with salt and pepper to taste. Sauté until both are cooked through, 8 to 10 minutes each. Remove and set aside.

Sauté vegetables, add meats, sauce
Cook onion, celery and bell pepper until soft, 5 to 6 minutes. Salt and pepper to taste. Stir in garlic and cook another 2 minutes. Return browned meats to pan, smoked sausage, and tomato sauce, bring to a simmer and cook, 18 to 20 minutes, stir often. Mix in rice just before serving.

The rice
In a large sauce pan over medium-high heat toast rice in a little olive oil for 2 minutes. Add chicken broth and bring to a boil, cover and remove from heat. Let sit at least 25 minutes. Remove lid and fluff rice with fork.
Posted by behindthebites@gmail.com