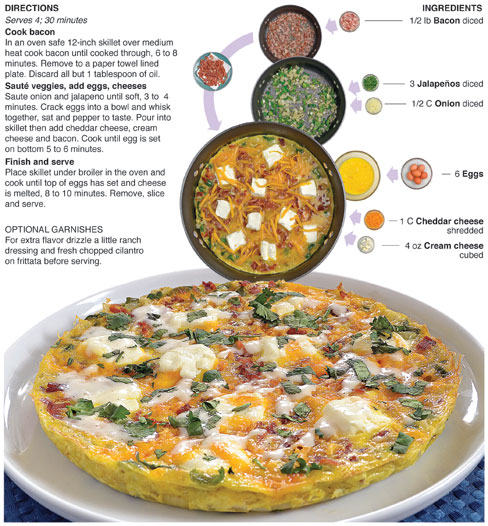 I prefer making omelets the Italian way. So I guess I like making frittatas. I have tried making traditional French omelets before and had disastrous results. After watching Tyler Florence make one on the Food Network – and make it look incredibly easy, I decided to make one for breakfast. By lunch time, I had picked one attempt off the floor and thrown it away, and the second attempt became scrambled eggs with sausage and green peppers. Frittatas are much easier with identical flavors.

For this recipe, I take the ingredients common to jalapeño poppers and distribute them throughout a frittata. The cream and cheddar cheeses add a decedent richness while the bacon and jalapeño provide a nice flavor punch. 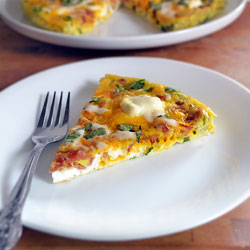 BEHIND THIS BITE
As a recipe developer, I stand behind all of my published creations. I have eaten everyone of the recipes on this site, and the photos are of the actual meals. There is no half cooked pasta and I've never used a curling iron to create grill marks to get a good shot. They are the real deal.

That said, some recipes are a cut above the others in appearance and flavor. This frittata is one of them. If I owned a restaurant it would be on the menu. It has a lot of bacon – which is a winner almost every time – but the star is the cream cheese and drizzle of ranch dressing as garnish. The two combine to create a rich creaminess not found in 99 percent of the omelets, or frittatas, I have ever eaten.

The recipe calls for ranch to be optional because ranch is often an optional dip with poppers and I wanted to stay true to that. I highly recommend that if you try this you use it though. I can’t wait to make this one again! 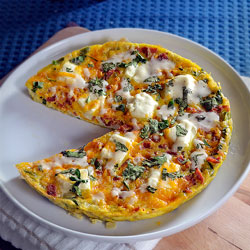 Cook bacon
In an oven safe 12-inch skillet over medium heat cook bacon until cooked through, 6 to 8 minutes. Remove to a paper towel lined plate. Discard all but 1 tablespoon of oil.

Sauté veggies, add eggs, cheeses
Saute onion and jalapeno until soft, 3 to  4 minutes. Crack eggs into a bowl and whisk together, sat and pepper to taste. Pour into skillet then add cheddar cheese, cream cheese and bacon. Cook until egg is set on bottom 5 to 6 minutes

Finish and serve
Place skillet under broiler in the oven and cook until top of eggs has set and cheese is melted, 8 to 10 minutes. Remove, slice and serve.
Posted by behindthebites@gmail.com