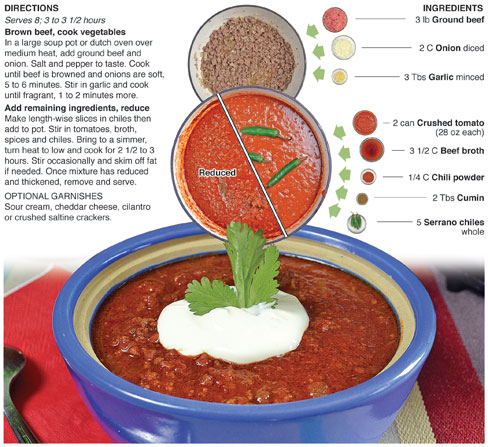 In response to the 10 inches of what the news labeled as “heart attack snow” that fell last week in Northern Indiana, I decided to whip up a pot of chili to comfort my soul. I needed something positive to go with Old Man Winter’s latest thrashing.

I had been waiting for the perfect time to try a recipe inspired by a chili contest I had entered last fall. Many of the entrants were hard-core competition cooks. They all made a similar type of chili that went into an expert category. It was more like a spicy, meat sauce with no beans and a smaller amount of vegetables and peppers than traditional chili.

I thought it would be the perfect dish to make for a snow storm and last Wednesday’s was hopefully my last chance this season to do it.

This recipe contains a large amount of beef and lots of liquid which is cooked out over time. As the chili simmers and reduces it gets thicker and the flavors concentrate, turning it into a dish so tasty I forgot about the snow outside. 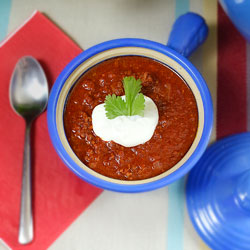 BEHIND THIS BITE
I had been wanting to make a pot of chili like this for some time. As I mention in the introduction, it was inspired by a chili contest I entered last fall, called Chilifest in Fort Wayne, Indiana. I had entered chili cook-offs before but this was the biggest by far. I wrote about it here and entered a unique vegan chili for Fort Wayne Trails. 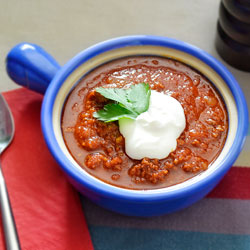 Many entrants seemed to belong to a club or group that went from chili contest to chili contest – almost like a car club that passes their spare time traveling to car shows on the weekend, except these people’s passion was chili instead of cars. All were very nice and many came to me to try the chili I had entered because it was a vegan chili, and many wanted a taste. After I got to sample their entries I realized why they were intrigued by mine. The contest regulars had their own category called CASI chili. (Chili Appreciation Society International) It’s officially sanctioned and the polar opposite to the chili I entered (hence the interest). What I loved about the CASI chili was its rich and meaty flavor. Many were spicy as well, I made note of the recipes and decided that I wanted to enter a CASI chili in next year’s contest.

I consider this recipe a great start for a CASI chili. It needs more spice and something to set it apart from the rest to enter in a contest, but it is exactly what I was hoping for as far as the texture and look. With a few refinements, I think I will have a chili that can compete. 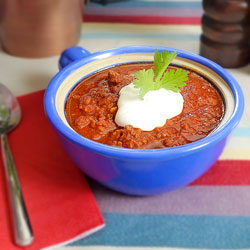 Brown beef, cook vegetables
In a large soup pot or dutch oven over medium heat, add ground beef and onion. Salt and pepper to taste. Cook until beef is browned and onions are soft, 5 to 6 minutes. Stir in garlic and cook until fragrant, 1 to 2 minutes more.

Add remaining ingredients, reduce
Make length-wise slices in chiles then add to pot. Stir in tomatoes, broth, spices and chiles. Bring to a simmer, turn heat to low and cook for 2 1/2 to 3 hours. Stir occasionally and skim off fat if needed. Once mixture has reduced and thickened, remove and serve.