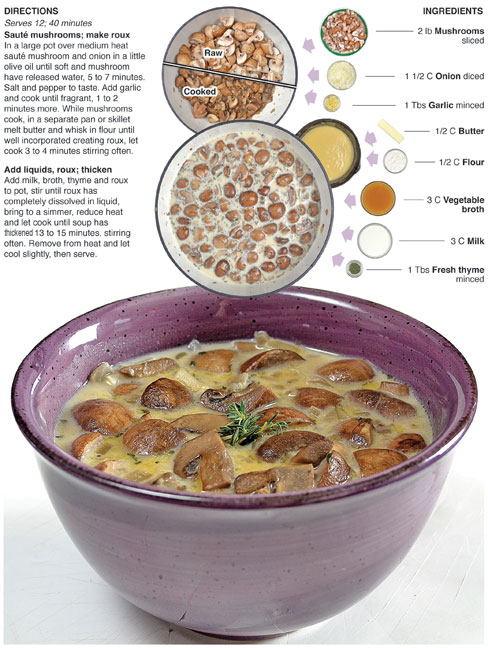 This is the second cream of mushroom soup I've created for the blog and the main difference with this one is that it’s vegetarian. I also made this batch a lot larger than the first. I needed this to be a starter course for at least 12 people.

I start off sauteing 2 pounds of sliced mushrooms with onions and garlic for a little depth. Then I make a roux. Instead of adding the flour and butter to the pot with all the other ingredients like I usually do, I did it in a separate pan. I thought there was too much stuff in the pot for it to brown properly. It actually made the process easier and I will probably do it that way again in the future. Once the roux was ready I added it to the cooked mushrooms along with vegetable stock and milk. For a little extra flavor, fresh thyme was thrown into the pool as well. I brought the mixture to a slow simmer and let it go for around 15 minutes so it could thicken. That's all it took, really simple if I do say so myself.

I have to admit, this soup was magically delicious. Once you have made cream of mushroom soup from scratch it’s hard to eat the canned version ever again. 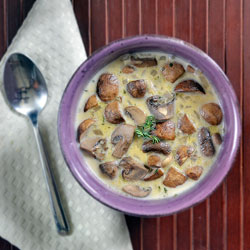 My Mom did the majority of the cooking for a mission at our church last week. It was lead by the Franciscan Brothers here in Fort Wayne.

As part of the deal, they asked for dinner each day of the mission, and because it was Lent they needed it to be vegetarian. Mom employed me to make a soup for them on the first day of the mission and this is the recipe I made. They finished almost all of it with just a couple of bowls to spare – which were sent to a couple from the church in need of help preparing dinner.

It was nice to see my food put to use for the good of others. I think it’s the least I can do in the good causes department. I know I need all the brownie points I can get with the man upstairs. I hope I can accumulate enough before my time is up to make up for the points I lost during my twenties! 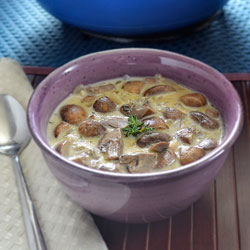 Sauté mushrooms; make roux
In a large pot over medium heat sauté mushroom and onion in a little olive oil until soft and mushroom have released water, 5 to 7 minutes. Salt and pepper to taste. Add garlic and cook until fragrant, 1 to 2 minutes more. While mushrooms cook, in a separate pan or skillet melt butter and whisk in flour until well incorporated creating roux, let cook 3 to 4 minutes stirring often.

Add liquids, roux; thicken
Add milk, broth, thyme and roux to pot, stir until roux has completely dissolved in liquid, bring to a simmer, reduce heat and let cook until soup has thickened 13 to 15 minutes, stirring often. Remove from heat and let cool slightly, then serve.
Posted by behindthebites@gmail.com