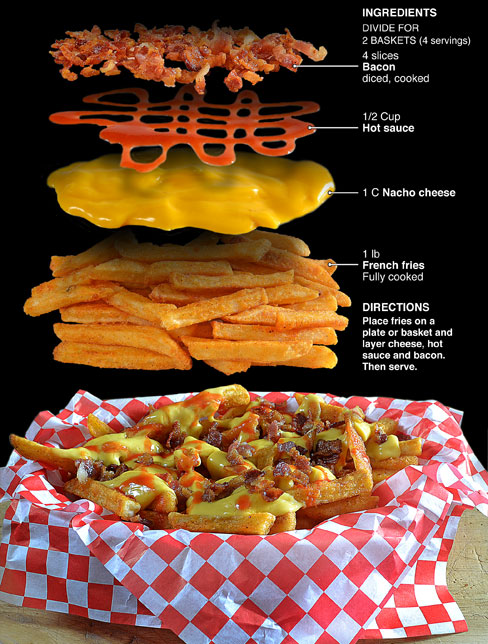 I have mentioned Buffalo Wild Wings in past posts and even made a couple of recipes that were inspired by them. This dish is not just inspired though, it's a recreation of their loaded french fries – What they call “Hog Wild Fries.”

I had eaten there many times before I noticed  it on the menu and decided to try it. They were sloppy, spicy and delicious – everything you would expect from food at a wings place. What I liked most was the hot sauce.

It seems like many national chains have a version of bacon and cheese smothered fries, but this is the first one I have eaten that included hot sauce, and that is why I had to make this at home and post it here.

There's nothing gourmet about my recreation. The fries are from the freezer isle, the nacho cheese is canned (BWW serves Queso on theirs) and Frank’s Red Hot provides the heat. I did cook fresh bacon and crumble it because I just can’t force myself to use store-bought bacon bits - especially on loaded fries!

I had to document these. I envisioned the layout of this post as I inhaled an order. I highly recommend trying either this homemade version or stopping by and getting some Hog Wild Fries at your nearest BWW, especially if you are a fry-lover like me! As I mention in the beginning, I go to Buffalo Wild Wings on a regular basis. Over the past winter I have eaten lunch there between 7 and 10 times and on each occasion I have noticed the same guy sitting in the same spot.

I remember this person because he is always wearing flip-flops.

We have had a cold winter and I have eaten lunch not only while it’s snowing outside, but after huge snowfalls. There have been thick blankets of snow that must be walked through to get into the place. That apparently was not enough for this man to put on as much as a pair of socks – let alone some boots!

I have given him a title.

Not only does he wear flip-flops during snow emergencies, but I’ve seen him wearing sunglasses inside the bar. If having feet immune to the cold wasn't cool enough, he also has cones and rods that are ultra-sensitive to light!

He is usually with a number of friends, all of which are sporting footwear relative to the conditions outside – So the flip-flops are not a clicky thing. Now that the weather is warming up I wonder if the Flop-Flop Blizzard man will start wearing Ugg boots and wool socks just to be ironic. I bet not, flip-flops are probably just his thing – rain or shine. Well, rain, snow, ice or shine. I commend him for sticking to his guns.

Place fries on a plate or basket and layer cheese, hot sauce and bacon. Then serve.
Posted by behindthebites@gmail.com

I love your last couple of posts with the black background with white letters. Also the expanded view showing the layers.

Justin, I've never seen anything like it! Merci beaucoup