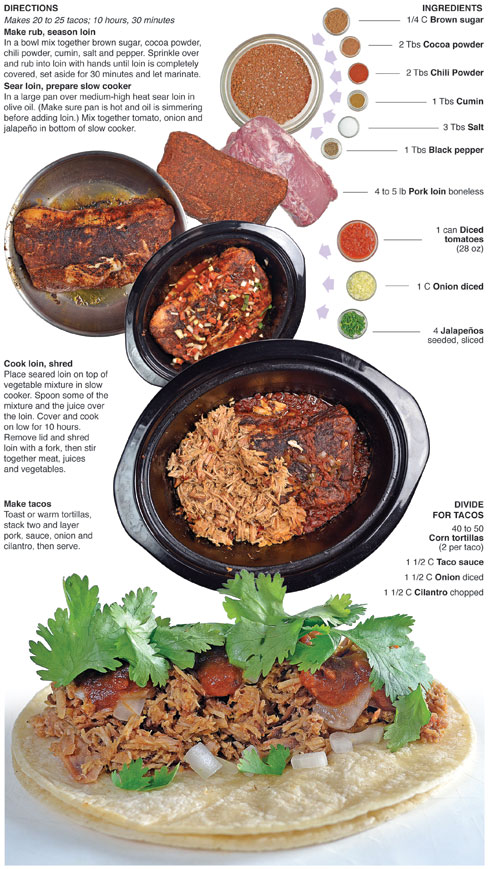 I have cooked several pork loins in the past. Usually I have either roasted them in the oven - or my favorite way - cooked them over indirect heat on a charcoal grill. Ironically, I had never cooked a whole loin in a crock-pot. Pork loin is lean and tender and I have always thought of the crock-pot as a vessel for turning the tougher cuts into fall-off-the-bone, melt in your mouth meals.

I found loin on sale and wanted to cook it overnight, so I thought the slow cooker was the best option. I made a sweet and savory rub for the loin and seared it on all sides before putting it in with tomato, onion and jalapeño. I set it on low at around 2 a.m. and went to bed.

I awoke around 9 a.m. and checked it. Everything look and smelled good but I decided not to remove the lid until it had been in for 10 hours. When I turned it off and lifted the cover at noon I used a fork to poke the loin. As soon as I touched the meat it feel apart. The entire loin had cooked into a tender juicy mess.

I shredded the entire loin and mixed the meat, vegetables and drippings together for some of the best shredded pork that I had ever eaten. The rub, vegetable base and cooking time of the meat culminated in a perfect pot of pork to share with a crowd. I served it with all the fixings to make either tacos or sandwiches. If you need to feed a group this recipe will do the trick. 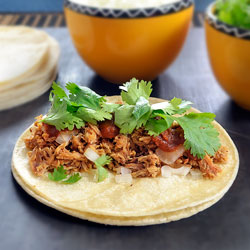 One of the guys at the meeting I served the loin at really liked the meat. At first I thought he was just being nice but I could see that he was genuinely into it. I had some left over and decided to give it to him. I didn’t have any baggies but there was an empty sack of burger buns on the table - I asked him if it was ok to use it and he said sure! Off he went with a sunbeam burger bun-bag filled with enough pork for a couple of meals.

When I saw him later in the week he complimented me again and said he finished it off. I was happy because the bun bag would have tempted me to toss it away as soon as I got home, I’m glad he kept it and hopefully it provided him with a lunch or two! 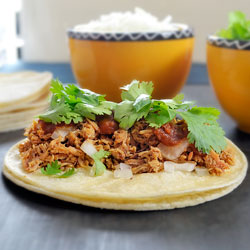 Make Rub, season loin
In a bowl mix together brown sugar, cocoa powder, chili powder, cumin, salt and pepper. Pour over and rub into loin with hands until loin is completely covered, set aside for 30 minutes and let marinate.

Sear loin, prepare slow cooker
In a large pan over medium-high heat sear loin in olive oil. (Make sure pan is hot and oil is simmering before adding loin.) Mix together tomato, onion and jalapeno in bottom of slow cooker.

Cook loin, shred
Place seared loin on top of vegetable mixture in slow cooker. Spoon some of the mixture and the juice over the loin. Cover and cook on low for 10 hours. Remove lid and shred loin with a fork, then stir together loin, juices and vegetables.