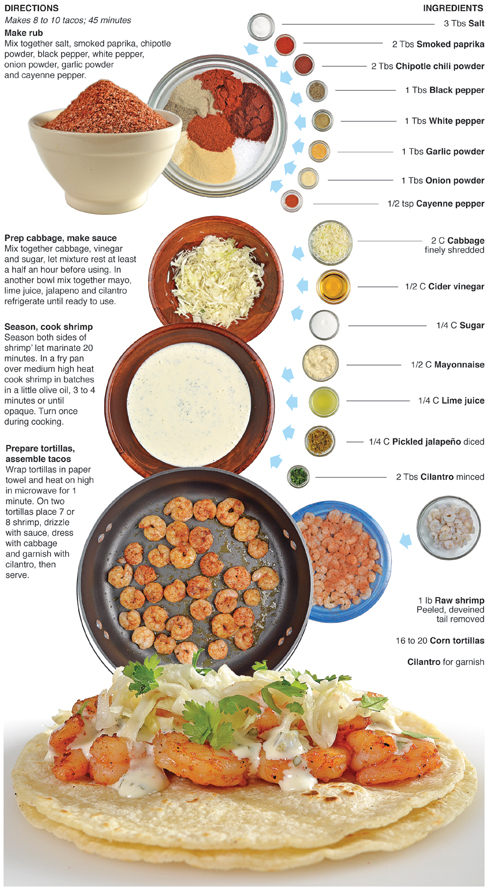 This is the second recipe on the blog that features the Smoky Five Pepper spice mix. This time I used it more like a seasoning rather than a rub. Being more judicious made it much more manageable as for as the heat goes. It adds a nice kick to the taco that is balanced by the pickled cabbage and a lime jalapeno tarter sauce.

I made it a point to keep each element simple. When it all came together I was impressed by the flavor and enjoyed 4 of these tacos myself. Later that night when I was putting together the graphic layout of the recipe I realized that all of these simple elements put together make for a pretty complex taco.

In the end, there are 17 different ingredients at work here.

That kind of blew me away, especially since I was making an effort to keep everything simple. It’s the accumulation of a few simple elements that makes this a pretty complex bite. I hope the simplicity comes through in the presentation, because if you’re just looking at the list of ingredients there is no way anyone would call it simple. That said - it's one of the best tacos I've eaten in a long time – a must try for any taco aficionado. 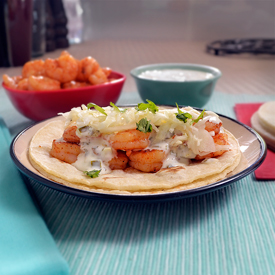 I have wined and complained numerous times on this blog about the seafood situation in Fort Wayne, Indiana. It’s hard to get any kind of consistent quality and most of the time it has been a "fishy" situation to say the least. I still think it sucks, but I have discovered one item that has shown some promise.

Yes, the smaller frozen shrimp has a glimmer of hope. The colossal shrimp has been an expensive disaster, which you can read about here, But the variety that comes in the 50 to 60 a pound size has given me a glimmer of hope. The shrimp used in this recipe thawed easy, had no odor and tasted like shrimp should taste when cooked properly. It’s the first time in a long time that I have been impressed with the quality of seafood here in the land-locked Midwest.

It could be just a lucky grab off the shelf or maybe I have discovered a quality product. It will take a couple more samples but I actually have some hope for consistently good seafood. I’m crossing my fingers. 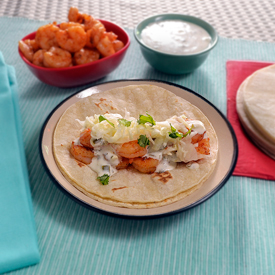 Prep cabbage, make sauce
Mix together cabbage, vinegar and sugar, let mixture rest at least a half an hour before using. In another bowl mix together mayo, lime juice, jalapeno and cilantro refrigerate until ready to use.

Season, cook shrimp
Season both sides of shrimp’ let marinate 20 minutes. In a fry pan over medium high heat cook shrimp in batches in a little olive oil, 3 to 4 minutes or until opaque. Turn once during cooking.

Prepare tortillas, assemble tacos
Wrap tortillas in paper towel and heat on high in microwave for 1 minute. On two tortillas place 7 or 8 shrimp, drizzle with sauce, dress with cabbage and garnish with cilantro, then serve.
Posted by behindthebites@gmail.com