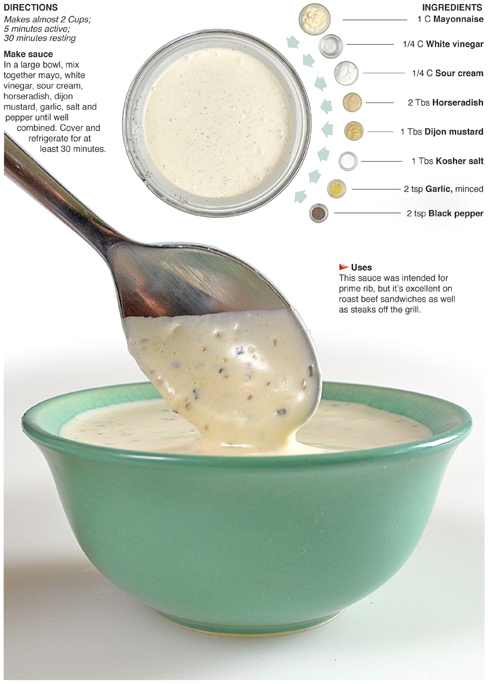 This is a redo of a recipe I made a couple of years ago. It was the sauce for a roast beef sandwich. Here, I use it on prime rib.

When I get the opportunity I like to re-shoot recipes that I have created before June of 2012. It was then I started shooting every photograph with my DSLR camera as well as using the same lighting technique for each shot.

Before then, I was only shooting the final photographs and the artsy food styled shots with the DSLR. I should have been doing it all along, but this is a creative process and with all creative endeavors, it evolves.

Another evolution in the work started around February of this year. Before then most of the pictures contained in the information graphic were take from directly above, or from a bird’s eye view.
I found that taking the final shot at a 3/4 view with an infinity back ground (like the horsey sauce above) gave the graphic more depth and allowed the final shot of the dish to pop right off the page. Most of my recipes contain this technique now. My photography will continue to evolve, and I have a new-found love and respect for the art form having spent the last two years trying to improve my skills.

BEHIND THIS BITE
This sauce was part of a large meal prepared recently and it was made for prime rib, but as it says in the graphic, it’s pretty tasty on any type of beef. It’s really a variation of a southern white barbecue sauce with the addition of horseradish and dijon mustard, turning it into something very similar to Arby’s horsey sauce. It’s great to have around for a little extra pizazz whenever beef is on the menu.