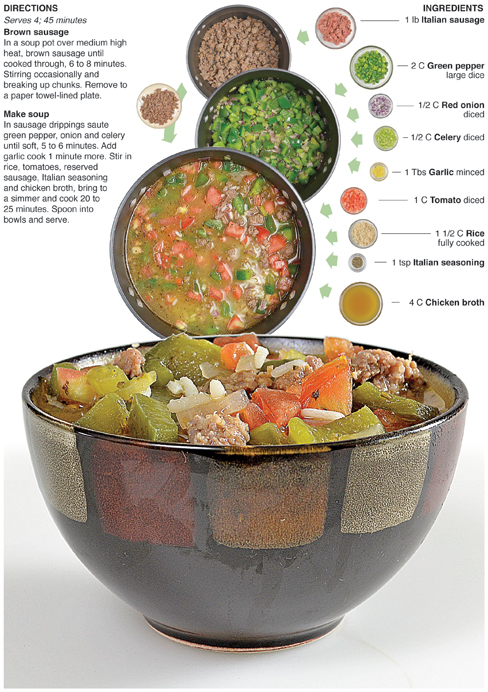 Growing up, my Mom and Grand Mothers referred to green peppers as mangos, I always thought this was odd but I just learned to accept it as a family quirk. Turns out there is some history to it.

An article by Linguist David Bergdahl helped shed a little light on the mystery of the green pepper-mango-misnomer. He says that the name originate with the tropical fruit mango, which was first introduced to colonial America in pickled form. It was the only way it could be preserved long enough to last during the long journey from India. In the 1700s, the word mango became a synonym for pickling in general. One of the most popular “mangos” was a pickled, cabbage-stuffed green pepper. Overtime, the name mango stuck for green peppers, even in raw form, and the term is still used today as a reference to green peppers in the Midwest.

Ah ... the mango mystery is solved.

For this recipe, I take all the elements of a modern stuffed pepper and make it into a soup. I use Italian sausage instead of ground beef to add an additional layer of flavor to the vegetables and chicken broth. It’s the perfect soup to make with all the extra mangos, or green peppers, that are hanging around the garden this time of year.

BEHIND THIS BITE
Like I said in the beginning, most people in my family called green peppers "mangos." This was never an issue until I moved to New York City. If you ask for mangos at Food World in Astoria, Queens you will be shown the mango fruit. If you then spot the green peppers, point and say “oh no, those mangoes” the little Caribbean produce man will then laugh hysterically and walk away. This will leave you feeling like an uncultured Midwestern dumb ass. I lived in the Big Apple for 12 and half years and every once in a while I would have a moments like this. It was a small price to pay for living in such an incredible city.

Brown sausage
In a soup pot over medium high heat, brown sausage until cooked through, 6 to 8 minutes. Stirring occasionally and breaking up chunks. Remove to a paper towel-lined plate.