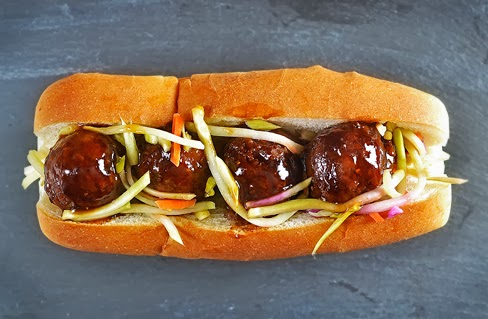 In the past, I wouldn't have posted this recipe. I served it to a group of friends last Sunday and it was a tasty treat that got a lot of compliments. It was an experiment though, with great potential to be a blockbuster party snack, but there are a couple of adjustments that need to be made for me to spend the time it takes to create the visual recipe that would be the centerpiece of the post. I do think this is worth sharing though because it was a tasty snack that can easily feed a group of 8 to 10. So, I'm just going with a few nice pics of the finished product, instead of the full-blown graphic treatment.

I decided to post this because I was going through photos of past recipes and looking at stuff I had never published. What I found was lots of good, original food creations that I would serve to anyone. The reason I didn't create a graphic for them was because they needed an adjustment to be a home run, rather than just a double up the middle. Sometimes I strikeout and those recipes shouldn't be published, but on the flip side it doesn't have to be an Iron Chef quality recipe to make it here - afterall, I'm not gonna run out of paper.

That said, I think this recipe needs an adjustment to the flavor of the meatball, so I really don't want to spend the time it takes to create a photo-driven infographic when I know I'm going to revisit it soon and turn it into something I would publish in a book - where paper does run out!

BEHIND THIS BITE
This is a play on my simple meatball sub recipe. I just thought I would twist it around a little and surround it with Asian flavors instead of Italian flavors. It seemed like a simple way to create something new from one of my favorite easy party snacks.

I purchased home-style meatballs from the freezer isle rather than Italian-style meatballs, but that was the fatal flaw of this dish. Even the home-style frozen meatballs were really garlicy and Italian flavored. They over-powered the stir fry sauce and broccoli slaw. I will make these again but I need to make the meatballs from scratch and use authentic Asian flavors that compliment the sauce and slaw. They were still tasty but to make a great Asian meatball sub, I won't be able to take the processed freezer isle route. (Unless Meijer starts carrying Asian-style meatballs of course.)

If I'm going to go all out and make the meatballs from scratch next time, I will also make the stir fry sauce rather than a store bought version. I think to do this right it needs to be more complex.

Overall, I would recommend this simple version for a low maintenance treat to take to a pot luck, they are tasty - just not 15-photo, full work-day information-graphic tasty. That will come later down the road!

Make Meatballs
Toss meatballs with sauce in a slow cooker. Heat on high for 2 hours, stir pot, and heat another hour or until hot and simmering.

Make slaw
Toss together broccoli slaw, rice vinegar and sesame oil, place in fridge and let marinate for at least two hours. Season with a little salt if necessary.

Make sub
On a hot dog bun layer meatballs and slaw, then serve.
Posted by behindthebites@gmail.com