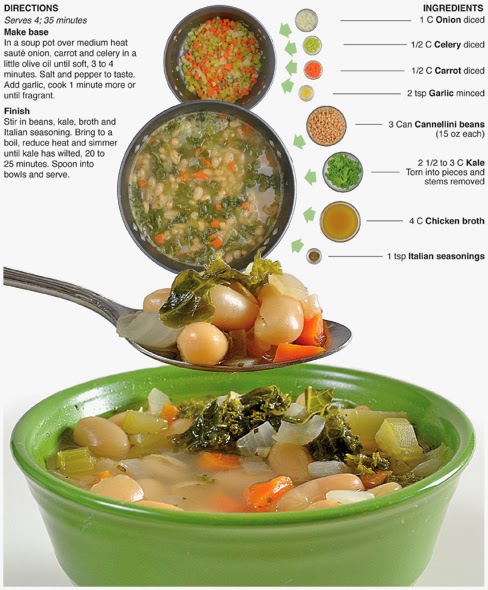 NOTE: This originally appeared in print the day after Thanksgiving.

As we gorge ourselves full of turkey, dressing and pumpkin pie for Thanksgiving, I thought it was my duty as someone who shares my kitchen creations with the public to produce a healthy and tasty bite to counter-balance the gut-busting, diet-crashing cuisine that seems to accompany most holiday celebrations.

One of the healthiest foods available in grocery stores today is kale. The non-heading, leafy member of the cabbage family is rich in vitamins A and C, frolic acid, calcium and iron. Kale can be grown in warm climates but it thrives in cooler ones which may explain its popularity among Northern Europeans.

For this recipe, I use it in a soup and it is cooked like spinach, but the kale takes longer to wilt and it doesn’t cook down as much. It’s mild flavor is a nice addition to the cannellini beans that become rich and buttery after a long simmer. This soup will be a flavorful and healthy addition to that turkey sandwich smothered in gravy the day after Thanksgiving.

BEHIND THIS BITE
This is the first time I had ever cooked with kale. I picked up a batch on sale and I thought it would be nice to try in a soup. I removed the stems and had a large amount of the leaves stuffed in a bowl. I thought that it would wilt down into just a fraction of its size like fresh spinach does.

Boy, was I wrong!

Once it was time for the kale I tossed in a couple hand fulls and waited for it to wilt down. And I kept waiting ... and waiting. I was seriously debating on weather to pull some of it out, but eventually it did cook down, and luckily I had thrown in just the right amount. I didn’t need to add anymore. I ended up using only a third of what I originally thought I was going to use.

It was a good experience and I want to use kale again, it has a mild flavor so I think I want to try and sauté it and make it the center piece of a side dish. Then well see how its taste really holds up.

Make base
In a soup pot over medium heat sauté onion, carrot and celery in a little olive oil until soft, 3 to 4 minutes. Salt and pepper to taste. Add garlic, cook 1 minute more or until fragrant.

Finish
Stir in beans, kale, broth and Italian seasoning. Bring to a boil, reduce heat and simmer until kale has wilted, 20 to 25 minutes. Spoon into bowls and serve
Posted by behindthebites@gmail.com