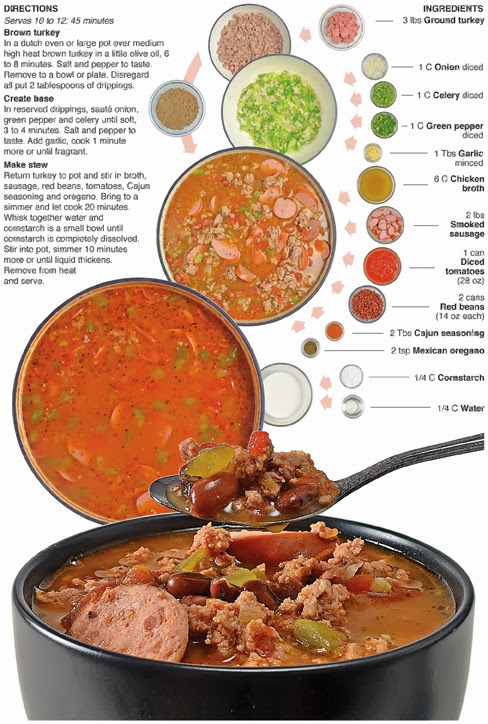 This year for Thanksgiving I wasn’t hosting a party, and wasn’t responsible for any of the major traditional dishes at either of the gatherings I was going to. I had made a large Thanksgiving dinner two weeks before the holiday to post the recipes here, so I had my fix of traditional Turkey Day cooking.

I did want to make something to take to both the parties though. The day before the holiday I went to the grocery store with an open mind. I found ground turkey on sale, which seems logical. If there is any week of the year when ground turkey would have some serious competition from whole turkey I would bet that week would be Thanksgiving. Having a sale on it is probably the only way to move it off the shelves. I bought a three pound package. Just down the isle I found smoked sausage at a bargain price. Check. After finding the two I thought I would make a Thanksgiving jambalaya.

I first browned the turkey then created a vegetable base with the New Orleans holy trinity of green pepper, onion and celery to start the dish. I had purchased red beans to go into the pot and because of that, I decided at the last minute to leave out the rice, I figured the beans would be enough starch. Once I got everything into the pot it was a bit to soupy, so I thickened it with a cornstarch slurry and what I wound up with was a New Orleans inspired Turkey stew. I think I could have still used the rice and made it more like a jambalaya but I’m pleased with the results. I didn’t have hardly any left over so I’m pretty sure it went over well with both sides of the family.

BEHIND THIS BITE
This dish marked the first time I had ever used a cornstarch slurry to thicken a dish with success. Years ago, I called my Mom in a frenzy while attempting to make a stew and she told me to add cornstarch to a little water then pour it in. Me being as stubborn as I am, decided to skip the dissolve in water part and just threw it into the pot. Obviously, it didn’t work. I just ended up with a lump of cornstarch in my beef soup. After that I had always used a flour based roux to thicken stews.

Acting fast to find a thickener with my Thanksgiving creation, I remembered my cornstarch disaster from yesteryear and decided to go for it. This time I dissolved it in an equal part of water and wala! it worked! Who knew!

I was so impressed with the results that I made traditional beef stew a couple days later and used the same technique to thicken it. What I like about using the cornstarch thickener over the flour thickener is that the cornstarch doesn’t change the color. Flour seems to give the liquid a blond color.

This is why I love cooking, there is always something new to be discovered.

Brown turkey
In a dutch oven or large pot over medium high heat brown turkey in a little olive oil, 6 to 8 minutes. Salt and pepper to taste. Remove to a bowl or plate. Disregard all put 2 tablespoons of drippings.

Create base
In reserved drippings, sauté onion, green pepper and celery until soft, 3 to 4 minutes. Salt and pepper to taste. Add garlic, cook 1 minute more or until fragrant.

Make stew
Return turkey to pot and stir in broth, sausage, red beans, tomatoes, Cajun seasoning and oregano. Bring to a simmer and let cook 20 minutes. Whisk together water and cornstarch is a small bowl until cornstarch is completely dissolved. Stir into pot, simmer 10 minutes more or until liquid thickens. Remove from heat and serve.
Posted by behindthebites@gmail.com