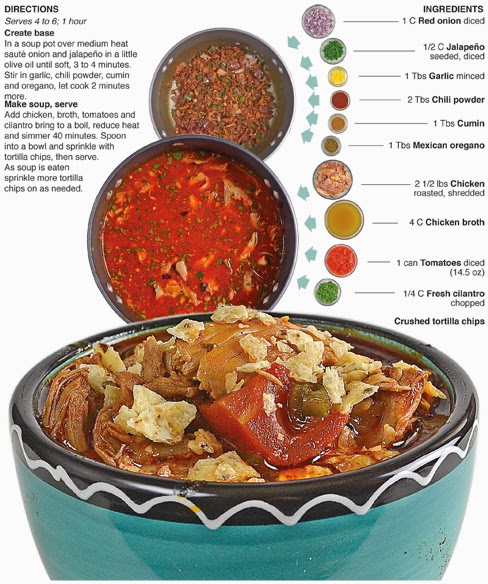 I walked into Walmart recently and was assaulted by the aroma of juicy and succulent rotisserie chicken! I felt as though I had been sucker punched by the ghost of Colonel Sanders and an instant craving for chicken arouse from my belly. All the local super markets seem to strategically roast a flock of chickens just as the day shift is getting off work and are shopping for dinner with an empty stomach.

The rotisserie chicken is good to eat while it’s fresh but it’s also excellent after a night in the fridge, especial when the meat is removed and shredded.

For this recipe, I make a tortilla soup with leftover chicken, any roasted chicken will do, not just super market rotisserie chicken. Instead of adding soft corn tortillas to the soup as it cooks, in this version I crumble tortilla chips in as it is served, like I would saltines in chili, creating a little texture as it’s eaten. Also, it’s simmered for 40 minutes which renders the chicken even further and helps make the broth extra rich and flavorful.

BEHIND THIS BITE
In the introduction I muse about the wonderful aroma of rotisserie chicken at the local super market, and I have used it many times for soup. The soup documented here features roasted chicken but not from the local super market. It features leftover chicken from my previous post. Had I not had it leftover in the fridge, I would have went to Walmart and bought a rotisserie, but I had roasted 5 pounds of quarters the night before and only ate one of the quarters. This is where most of those leftovers ended up – And I have to say the flavorful chicken was the perfect exclamation point in this delicious soup.

I have found that when using dark poultry meat in a soup, it’s best to let it simmer on low for around forty minutes before serving. I think it renders fat from the meat and creates a rich and tasty broth that is straight up out of this world, I did that with this soup as well as with a batch of white chili from a while back. I must say, the extra simmer time turns a good soup into a great one.

Create base
In a soup pot over medium heat sauté onion and jalapeño in a little olive oil until soft, 3 to 4 minutes. Stir in garlic, chili powder, cumin and oregano, let cook 2 minutes more.

Make soup, serve
Add chicken, broth, tomatoes and cilantro, bring to a boil, reduce heat and simmer 40 minutes. Spoon into a bowl and sprinkle with tortilla chips, then serve. As soup is eaten sprinkle more tortilla chips on as needed.
Posted by behindthebites@gmail.com