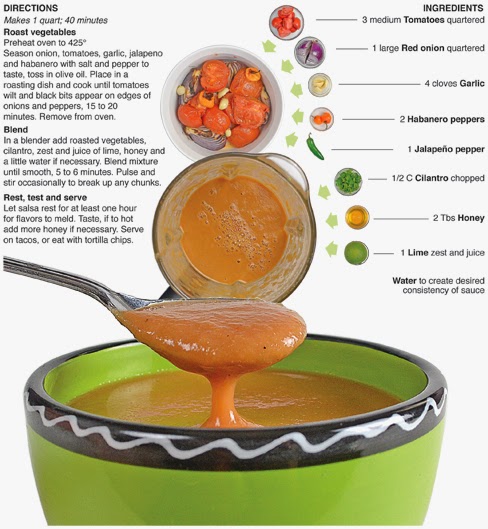 My favorite thing to eat is tacos. I specialize in them. So much so, that people sometimes pay me to create a taco bar for their event or occasion. The secret to a great taco is not the meat, tortillas or toppings. The secret is in the sauce, where heat from a hot pepper, tartness of a lime, or a limitless number of ingredients can be used to create a flavor explosion that defines the taste of the taco.

When putting out sauces for a taco bar I always include a couple of the mild variety, for the none heat-loving people, and a couple of spicy offerings for those who can handle the fire.

For this recipe, I make a habanero hot sauce for heat lovers. I’ve been working on it for sometime, because it’s easy when using habanero peppers to make sauce so hot that it literally creates pain and misery. Here I use the acid of tomato, the citrus of lime and the sweetness of honey to balance the habanero inferno. The sauce is hot, but hot in an addictive way, that’s sure to create future cravings.

BEHIND THIS BITE
I made tacos for a gathering at the church recently and put out a sauce that I thought was really hot. Earlier in the day when I made and sampled it out of the blender, it was lip numbing and set my mouth on fire. In the 4 hours between that taste and actually serving it, the lime and sugar really went to work on the heat and as the flavors melded together, completely neutralized it. I was telling people to watch out because it was hot. After a while a friend of mine came over and said “I thought this sauce was supposed to be hot?”

I then went and sampled it.

I was astonished that the heat had disappeared, and a little embarrassed because I was really talking the sauce up. Since then, everyone who tried the sauce has given me a hard time about it. That’s the inspiration behind this sauce. I could make a hot sauce so hot it would be inedible, but I wanted to make something that packs a whollop but can be eaten on two or three tacos at dinner, so there needed to be some restraint to the fire. This sauce does that.

I recommend using only one habanero the first time if a person is just experimenting, but for a hot sauce lover two habanero is the way to go. Make sure you have tissue around when you try this – it will make your nose run!

Roast vegetables
Preheat oven to 425°
Season onion, tomatoes, garlic, jalapeno and habanero with salt and pepper to taste, toss in olive oil. Place in a roasting dish and cook until tomatoes wilt and black bits appear on edges of onions and peppers, 15 to 20 minutes. Remove from oven.

Blend
In a blender add roasted vegetables, cilantro, zest and juice of lime, honey and a little water if necessary. Blend mixture until smooth, 5 to 6 minutes. Pulse and stir occasionally to break up any chunks.

Rest, test and serve
Let salsa rest for at least one hour for flavors to meld. Taste, if to hot add more honey if necessary. Serve on tacos, or eat with tortilla chips.
Posted by behindthebites@gmail.com