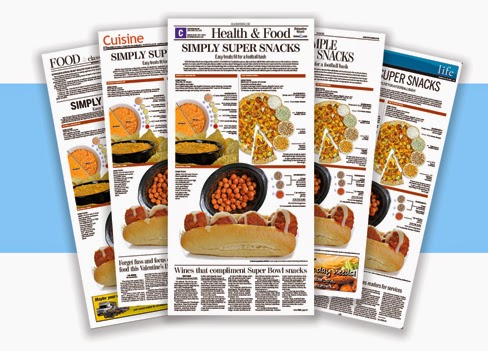 I'm happy to say that 11 Newspapers out of the 17 put together at the Design Center in Munster for Lee Enterprises have used my Super Bowl snacks project. I put it together from recipes that have originally appeared here!

It has been my goal from day 1 at my new job to find a way to get my recipes published at the center. I saw the opportunity with the Super Bowl. Hey, it's where Steve Jobs launched Apple, so I said what the heck, maybe this is the opportunity I've been looking for to take what I do here to a different level.

As a bonus, I got a VIP award from the management, but more important, there are editors at Lee Enterprises that are now well aware of my skill for recipe development and food presentation. I can't wait for the next opportunity to arise. 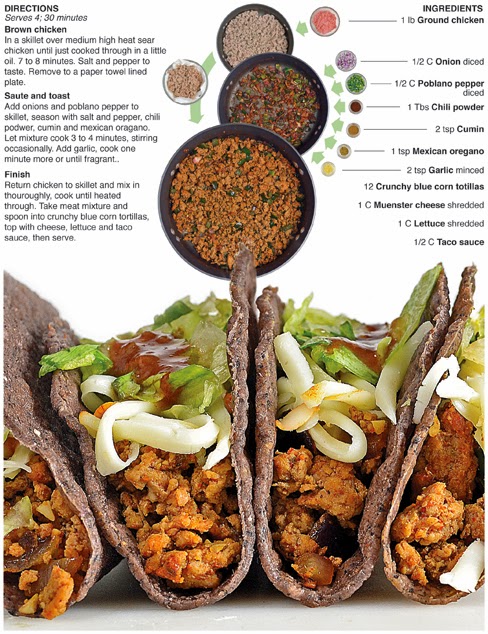 Since I was a young boy my favorite food has been tacos. I would go crazy when I saw that boxed taco kit sitting on the counter as Mom began to prepare dinner. I would gorge myself on them – most kids experience binge eating for the first time with sweets – not me, my first binges were crunchy tacos and fried shrimp!

My taco pallete has been refined over the years but I still have a soft spot for crunchy tacos prepared the “American” way.

Most U.S born eaters know tacos as having a crunchy shell, seasoned meat and garnished with lettuce, tomato, onion, cheese and a taco sauce. The main flavor is contained in the meat. While this kind of taco is delicious, it is far from authentic.

I first learned this taco lesson from the manager at LaBambas, while attending Ball State University. I literally ate there everyday and I think he felt obligated to share some secrets of Mexican cooking with me. Much like a parent would with a child that they are feeding on a daily basis. He told me that authentic Mexican taco’s signature flavor comes from the salsa that it’s garnished with. I came to love this type of taco over the years and have to admit that making a rock star sauce for simple soft corn tortilla tacos is my favorite thing to do in the kitchen.

But today, it is about those boyhood taco feasts my mom used to serve up.

My American taco starts with a crunchy blue corn tortilla which in this case, is a little lighter than the yellow corn tortillas found in kits at most supper markets. For the seasoned meat, I skip the traditional packets found at the store and make a homemade meat mixture complete with a flavorful and fresh mirepoix and a tasty seasoning mix of my own.

When it was all said and done I binged on these like I did as 12 year-old – and it didn’t take long to inhale half the batch!

BEHIND THIS BITE
As 2015 begins I can’t help but think about the year that has just passed. It has been a year of great change for me, with my move to the Chicago area – something I never imagined myself doing even six months ago. I haven’t blogged as much since my move, much of that has to do to with the transition of settling into a new place and finding the right kind of time to produce these post. My motivation seems to be more toward creating a kick-ass living space with everything custom built rather than custom built recipe-blog posts.

There is a great irony here though.

I haven’t produced as many post since starting my new job, but I have been cooking far more than I was before I started it. I’m still documenting my creations, I have just found it hard to put in the time that it takes to created a recipe infographic. In my free time, I’m still opting to work on a building project rather than tinker on my computer. Soon though, I will run out of major construction and will inevitably turn my attention here again. I already have a back-log of several creations that I have documented since I have had my photography studio up and running.

I can’t wait to see what 2015 brings, with my cooking, new job and new place to live. I feel as though this new adventure is really starting to take off and I hope to be blessed with the things necessary to keep it moving forward.

Brown chicken
In a skillet over medium high heat sear chicken until just cooked through in a little oil. 7 to 8 minutes. Salt and pepper to taste. Remove to a paper towel lined plate.

Finish
Return chickech to skillet and mix in thouroughly, cook until heated through. Take meat mixture and spoon into crunchy blue corn tortillas, top with cheese, lettuce and taco sauce, then serve.
Posted by behindthebites@gmail.com at 3:12 AM 3 comments: