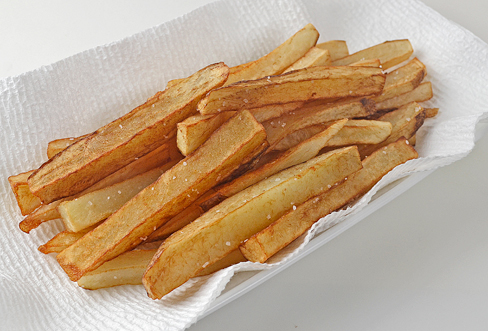 Great homemade french fries are not as easy as they seem to make. Getting the crispy outside and soft, pillowy inside takes some work. I think they are the greatest side dish of all-time and are totally worth going the extra mile for. In fact, I would rather overcook a burger or burn the pizza rather than screw up the fried spuds – they are just that important.

Most people just cut the potatoes and then drop them in oil. This results in decent fries but often they are way overdone and too crunchy or cooked just right without the crispy outside. Such high hopes for the work it takes to cut them often ends in the devastating realization that the french fries are below average or just plain suck.

In order to get the best results, good fries need to be cooked twice and cut as evenly as possible. Most restaurants that make fresh cut fries will first fry them at a low temperature until they are just cooked through, let them cool and fry them again at a hotter temperature to get the crispy outside.

In order to avoid the maximum grease intake, I like to boil the fries first in water to cook them through, then frying them to crisp them up. Just one bath in the hot oil results in less grease absorbed by the potato and there isn't much of a difference in taste.

The boil then fry technique is how I made this batch of fries, which resulted in some damn good crispy spuds. I used my knife to cut them instead of a french fry cutter and that turned out to be their one real flaw. The inconsistent size resulted in varying degrees of doneness and crunchiness. The batch was pretty good overall, but they would have been much better had I dusted off the fry cutter to get one consistent size. With french fries – consistent size matters.

After making these, I have decided to try and master the beloved homemade french fry, it will take some work but I consider this the beginning of a quest, a culinary journey to make the perfect fry. I have no disillusions that mine will ever top McDonald's, the greatest french fries the world has ever consumed, but something that comes close.

Cover potatoes with water in a pot. Bring to a boil and cook through, 8 to 10 minutes. (This may vary according to the size the fries are cut into) Drain and let cool to room temperature. Heat oil to 375° in a large pot. Fry potatoes in batches until golden brown and crispy 4 to 5 minutes.  Remove to a paper towel lined plate or bowl. Immediately season with salt to taste. Let cool slightly, then serve.

Posted by behindthebites@gmail.com at 4:21 AM