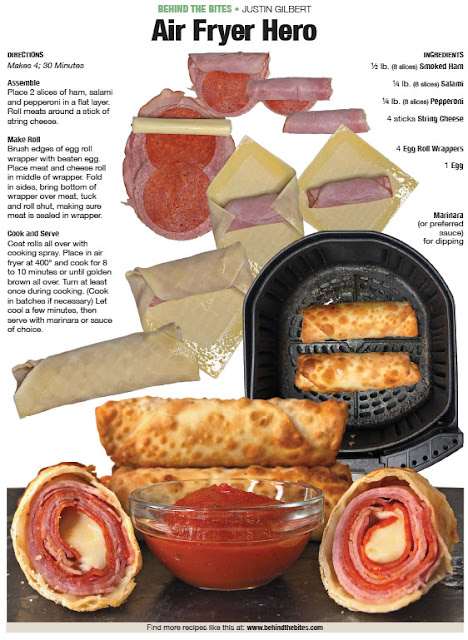 This is the first time I have used the air fryer to cook egg rolls.

The air-fried wrapper was much lighter and more flaky than an oil-fried version - which is the logical result when hot air replaces a scorching oil bath.

In the end, this turned out more like a hot pocket than an egg roll - And I happily destroyed two of them just seconds after snapping the money shot in the recipe above. If you like hero or italian-stlye deli sandwiches - you'll like this.

I had two left over that I reheated the next day. They were far superior to any fried egg roll left-overs I had ever eaten. That's not saying much though because left-overs of anything deep fried is usually a horrific disappointment that lingers like a wet-sock in your belly.

The great thing about this recipe is not the recipe itself, it's the technique.

Nearly anything can be rolled up in an egg-roll wrapper and cooked like this. And it will retain a good quality for longer than a fried version.

For the first two years of the pandemic, creating a new recipe each week for the publications that use my work was something I really looked forward to doing. Now, I find myself wanting to do other things that I haven't been able to do for the last two years. The idea of photographing and prepping a special recipe isn't as appetizing these days - especially with a million other things to do in New York City. (Mainly, getting behind a drum kit and melting some faces!) I still produce these weekly and enjoy the process - I'm just not as gung-ho for it as I have been in the past.

I've went through uninspired phases in both my career as well as playing music. I think it's part of the ebb and flow of life. The key is working through it. It's the creative lulls that separate the great artist from the good - because great artist do it even when they don't want too.

Posted by behindthebites@gmail.com No comments: