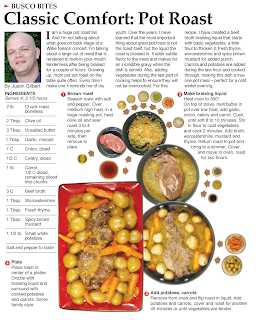 I said in the introduction to this column, I remember having pot roast quite often when I was a kid. The first time I made it on my own, I was talking to Dad on the phone and I proudly told him what I was making. He quickly replied "I could care less if I ever eat another pot roast. Your mom burned me out on that stuff years ago." Judging by Dad's reaction, I guess I remember pot roast because we ate tons of it growing up.

BRAISING LIQUID
A few years ago I made a recipe from Cuisine at Home magazine that featured a braising liquid made from beer and crushed pretzles. Sounds weird, but I have to say it was magnificent. Since then, I've paid special attention to the liquid I cook pot roasts in. It adds so much to the final dish.

THE COLUMN
I encountered a strange thing when I put this week's recipe together. The final plated dish worked better from a design stand point rotated 90° counterclockwise. In order to have the lighting appear the same in all the shots, I rotated all of the photographs to match the main art. It's a subtle thing, but all of the lighting is from top and bottom. That's because of the rotation. I light everything form the sides usually, because that is the way my photo station is put together. Overall, I'm pleased with design and presentation, it was a lot to put in a limited amount of space. I'm most happy with the introduction. I don't always get to hit the readers with a joke right off the bat but this week it's the first thing. With a dish called pot roast, there had to be a smart-ass marijuana reference.

FINAL THOUGHT
I have been cooking indoors for the better part of 4 months now. Pot roast is a classic cold-weather dish and I'm glad I got to feature it in the column - but I'm so ready to grill something outside. I could grill out if I wanted to, but it's just not the same in a winter coat and gloves. Bring on the warmth! I need to get my grill on.