Salad is Not Always the Best Option

I am a lucky person when it comes to eating.

I have been able to eat what I want without ever having to worry about my weight. Every so often, though, I get the urge to eat healthier, especially if I stop for fast food. If I am at McDonald's I will get a Filet-o-Fish, for example, instead of a Quarter Pounder with cheese. I realize that eating healthy and fast food really don't go together. It's just an attempt to ease what I call fast food guilt, which kicks in as soon as I pull up to the drive-thru window.

Recently I was at Taco Bell and ordered a value meal that consisted of two Crunchy Tacos Supreme and a Mexican Pizza. After I ordered, I was hit by fast food guilt and thought that I should have gotten a taco salad instead. Why? Because I'm a guy, and guy logic tells me that healthy eating always involves a salad!

After a little research I was very surprised to find the exact opposite at Taco Bell. 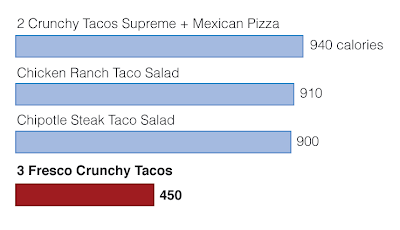 Eating either the Chicken Ranch or Chipotle Steak Taco Salad at the Bell would have saved me only 30 or 40 calories.

Taco Bell has what they call a Drive Thru Diet.  I would have opted for three Fresco Crunchy Tacos from that menu, which would have cut down the calories significantly. The only catch to this is that I saw the Drive Thru Diet when I was eating at Taco Bell and I dismissed it.

Because there was no salad on the menu!

It was not until I researched the Taco Bell menu online that I discovered that the diet menu really does have much less calories.

THE MORAL OF THE STORY
If you are feeling like cutting back on calories it's probably not a great idea to eat fast food at all. But if you do, and you're a guy like me, take someone who knows a thing or two about cutting calories, or do your research beforehand (this post counts as research, I'd like to think).

Find all of the Nutritional facts about Taco Bell's menu here:
http://www.tacobell.com/nutrition/information