A Seafood Salad for Summertime 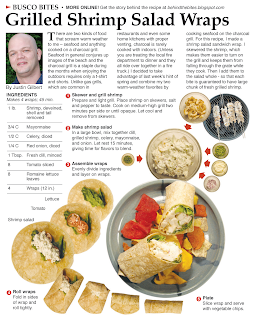 I was so happy to make this recipe! I bought the shrimp at the grocery store across the street from my old apartment in Queens. It was fantastically fresh AND I got to grill it on my girlfriend's porch.  Fresh New York City seafood, grilled on a New York City porch – that is just heaven. As I have discussed in this column before, it was so nice to get seafood that is so fresh it taste and smells like the sea. You literally have to be near the ocean to get it at an affordable price.

The shrimp was actually left over from the night before. I had planned to make a shrimp taco as part of a taco party Nicole (my girlfriend) and I hosted. Everyone was full after the steak and chicken tacos, so I ended up with shrimp for the next day. The idea to make a shrimp salad came during brunch. It seemed like a great summer sandwich -- and summer was in the air because it was the first warm weekend of 2011.

THE COLUMN
As a visual for the printed recipe, I was very happy with how the wrap is built and rolled. It also flows nicely around the final dish. I had never eaten the vegetable chips before. They were Nicole's suggestion and I am glad she did  - they're tasty and leave you feeling less guilty about eating chips. They also add great colors to the final plate.

FINAL THOUGHTS
I made the decision to add the shrimp whole. Most of the time when I get seafood salad, the meat is so cut up that it is virtually hidden. Not this salad. The whole shrimp creates giant unmistakable bites of delicate and tasty seafood. This is the only way I am ever going to make this salad again. Whether it be with fresh lobster, tuna or shrimp - the bigger bites make this feel like lunch at a great seafood restaurant.