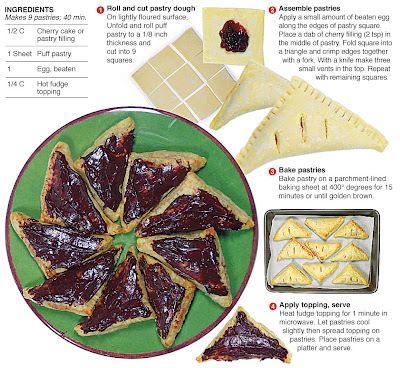 Black Forest is a type of cake or torte originating in Germany that features the insanely delicious combo of chocolate and cherries. I had heard of “Black Forest” vaguely in the past, but I really had no idea what it was. When I set out to make this treat I had multiple flavors to work with –  sugar and spices, pie and cake fillings, and a couple of yummy toppings. My experience creating dessert is limited so I wanted a number of ingredients at my disposal. I made combinations of the fillings and toppings in different forms using puff pastry for the dough.

Through my own natural selection, I thought that two of the flavors, cherry and chocolate fudge, stood out and made for the tastiest treat. At the time, I believed I had discovered culinary gold. I told my girlfriend about my revolutionary dessert. She said “sounds like Black Forest.” My mom said the same. I looked it up. Cherry and chocolate fudge may not be a culinary revelation invented in my kitchen, but it is the star of this week’s recipe. 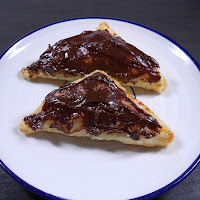 BACK STORY
Before I started creating this column I had literally made three desserts in my life. I don't really have much of a sweet tooth. Nine times out of ten, if given the choice, I'll take the ribeye steak over the cheesecake. Really, it's more like 49 to 50 odds. Growing up, my mom always had two or three different boxes of Little Debbie snacks in the cupboard. Nutty bars were my favorite. There was never any limitation to me eating them. I lived on them from the age of 11 to 18*. They say that a child who is denied sweets growing up craves them as an adult. If the opposite is true, I am a shining example. I always take savory over sweet.

I really go crazy when I create a dessert for the column. I load up on flavors and just try different things. It's really fun. The savory dishes are easy for me. Cook it once and I know how to adjust it to make it right. Usually it take four or five different experiments to get a dessert right. The black forest pastry recipe is the third attempt - I must be getting better at desserts!
*When I went away to college my Mom went from buying five or six boxes of Little Debbie snacks to 2 boxes per week, and I also lost 10 pounds.
THE COLUMN
The introduction here is the absolute truth. I thought I had discovered this amazing thing. Which is naive for any cook to ever think about a recipe. Chances are always that it's been done before -- especially when you are talking about a simple flavor combo like chocolate and cherry.
FINAL THOUGHTS
Clean design, tasty treat. Not as magical as a Little Debbie, but really, what is?
Eat well, cook often ...
Posted by behindthebites@gmail.com at 6:01 PM