A Cheesy Little Bite With Zing 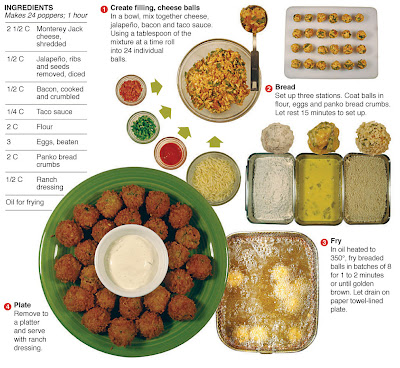 The jalapeño was named after the town of Jalapa in Veracruz, Mexico and was first used by the Aztecs. Following the voyage of Christopher Columbus to the “new world,” it became popular all over the globe. In the 1990s, Texas declared the jalapeño “a culinary, economic, and medical blessing to the citizens of the Lone Star State,” and made it the state’s official pepper.
My favorite jalapeño dish is the jalapeño popper. But most of the time when I get poppers in a restaurant or frozen at the store, they are served whole, breaded and stuffed with cheese. The end result is a large snack with a molten cheese center that ends up blistering some part of my face.
For this recipe, I create my own jalapeño popper. The peppers are diced, with seeds and ribs removed to limit the heat. They’re made small so that when served hot, the cheese doesn’t run all over your tongue and chin like liquid iron from a smelter. I added bacon to the mix and breaded it for a smoky, cheesy, jalapeño bite.

THE BACK STORY
My girlfriend and I had a conversation about jalapeño poppers before I wrote the introduction to this column. We both agreed that the most frustrating thing about eating poppers, which both of us love, was the fact that most of the time you end up with third degree burns on your chin after taking a bite. It was for this very reason I never eat poppers as soon as they're served. I always let them cool off for a bit before taking a bite.

That is why I made this version of the popper bite-size.

Also, I wanted to limit the amount of jalapeño consumed in each bite. One popper. One Jalapeño. That is the usual recipe. Eat three of four or nine (which I could do) and you're consuming a lot of capsaicin - the chemical that creates the heat. Too much of that makes for an unpleasant morning. With spicy food you need to focus on quality, because quantity can be painful.
I think that when Johnny Cash sang "Ring of Fire," he must have been thinking about some morning after getting hammered on Jim Beam and consuming 13 jalapeño poppers.
Eat well, cook often ...
Posted by behindthebites@gmail.com at 4:56 PM