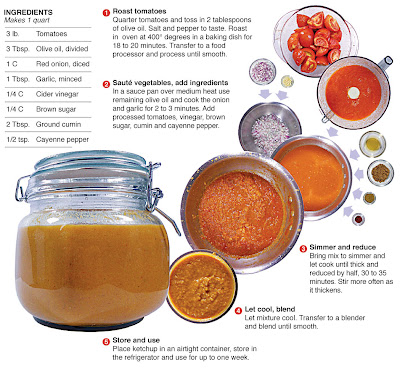 Ketchup is cheap. I bet there is a bottle in your fridge right now. Why would you ever make it from scratch? The best reason I can think of is to use up a tomato crop. The biggest problem for most gardeners is consuming and preserving all the tomatoes the plants can produce. Show me a garden with a tomato patch and I'll show you tomatoes going to waste – and just waiting to be thrown at high velocity by a teenager. 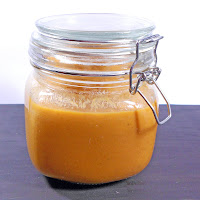 Almost everyone I know who has a garden plants tomatoes, and they harvest buckets-full – way too many for all of them to be consumed. That makes a scary number of nature's baseballs to leave laying around. It is why making homemade ketchup is important for tomato growers. If you’ve run out of things to make with tomatoes, which most will, then make ketchup! For this recipe, I create a spicy Southwestern ketchup featuring cumin and cayenne pepper, perfect for spicing up a burger – and a delicious way to rid the garden of all the extra potential projectiles. 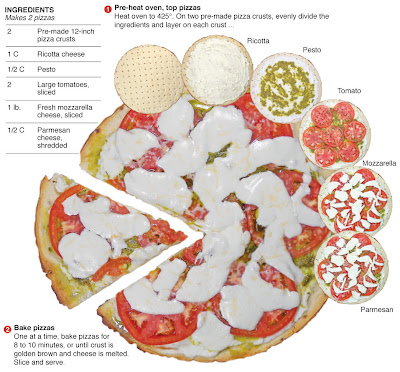 If I were homeless, I would roam the Midwest during August. Food wouldn’t be a problem because there are gardens everywhere and most of them are much easier to take a meal out of than a kitchen inside a home. Many gardeners have more tomatoes than they know what to do with anyway, and wouldn’t notice some missing to feed a hungry man.

I would make the following pizza recipe with a few extra tomatoes taken from a stranger’s garden in the night. To cook it, I would carry a small camping oven with me. I have no idea how I would get the three cheeses or the other ingredients.

For this recipe, the sauce is basil-based pesto and tomato slices join as a topping. The cheeses make this pizza creamy and decadent. All together, this pie would be a great meal for a homeless man and even better for a gardener getting rid of extra tomatoes. That way their teenage children have nothing to throw at the homeless man walking by the garden with a camping oven.

Episode III
Sausage-Stuffed Tomatoes
Ok, ok! The truth about all these tomato recipes 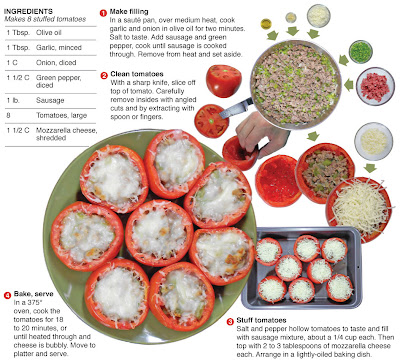 It was late August and I was 11 or 12. I had been trying all afternoon to get my timing perfect. I was laying in wait, hidden in the over-grown foliage of a fence row that lined our alfalfa field next to a gravel road. With me was a small bucket of over-ripe tomatoes I had discovered in my Dad’s garden. Like most tomato patches, a small bucket would never be noticed among the abundant crop that the plants yield. 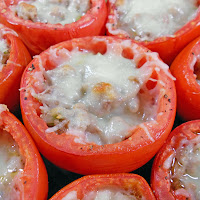 This is the inspiration for all my tomato recipes. The world needs as many delicious tomato creations it can get so that there are less buckets of them to be found by a bored 12-year-old.

Hidden in the fence row, I was lobbing them into the road trying to make tomato paste on windshields.

Out of frustration, I blew my cover, stood up and drilled a neighbor’s Ford Bronco as it passed. A grounding and a near-beating followed.

For this recipe, I stuff tomatoes with a sausage mix and mozzarella cheese. It’s a delicious treat and my latest attempt to rid the world of all uneaten garden tomatoes.

Posted by behindthebites@gmail.com at 4:10 PM