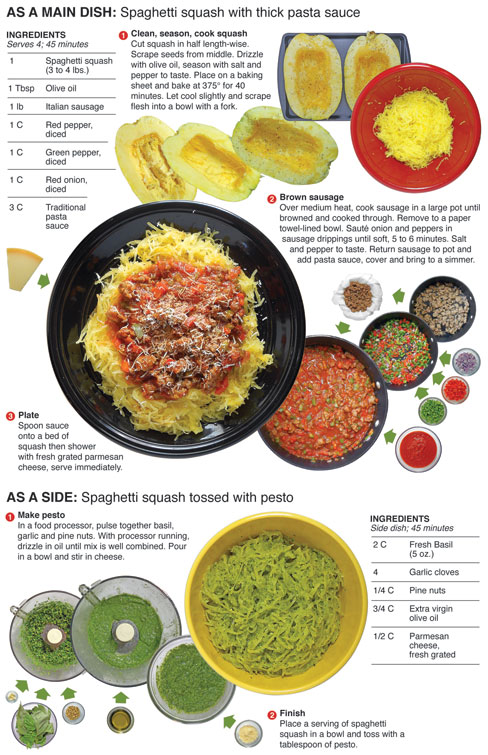 Squash has been dated as far back as 7,000 B.C. in parts of Mexico and South America. According to The Oxford Companion to American Food and Drink, explorers from Europe originally thought squash were melons and were delighted to find them everywhere they went in the new world. Another example of a modern food staple of the western world that was discovered in the Americas. I'm starting to think that the diet of most Europeans before they began exploring consisted of grass, tree bark and the flesh of what ever animal they weren't currently using as transportation.

For this recipe, I use spaghetti squash, a winter variety, which resembles its namesake pasta when cooked and removed from its skin. The first recipe features a hearty mixture composed of sausage, onion, fresh peppers and store-bought traditional pasta sauce that tops the squash – which works well as a delicate and tasty substitute for spaghetti pasta. The dish can easily serve as the center piece of a meal. The second recipe features spaghetti squash tossed with basil pesto, this dish works best as a side.

BEHIND THIS BITE
I have been waiting all summer to cook home-grown spaghetti squash and substitute it for none other than - spaghetti! My Dad had planted it in the garden, and I knew that there would be copious amounts by the fall. 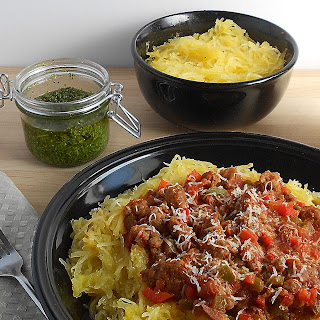 Gardeners all over northern Indiana have little stands out near the road to display and sell their leftover bounty from the garden. It starts with tomatoes, cucumber and zucchini in late summer, then slowly, as fall sets in – the pumpkin, acorn and spaghetti squash slowly take their place.

What amazes me about these stands is that they are unattended. There is only a list of prices, like four cucmber for $1, and a jar or container to put the money in. You could take as much as you wanted and not leave a dime or even steal the money in the jar – but that rarely happens. It's a karma thing. I bought three tomatoes at one of these stands recently and written on top of the money jar was "My God is Watching."

I almost left double the amount.

These stands are a great representation of the openess and optimism of the rural Midwesterner. People in other parts of the country might call it naive, but I believe that comes from the somewhat-synical world view that most urban dwellers must develop to survive in places dominated by grift and the grifter.

In more than a decade living in New York City, I saw nothing that I could compare to these goodwill vegetable stands. Don't get me wrong, there are many awesome things created purely from goodwill in the Big Apple. You just don't find the buying and selling of goods at a road-side stand based on an honors system. They were a site to see last summer, my first in the Midwest since the late 1990s, and a great source of fresh vegetables at a price grocery stores or farmers markets couldn't compete with.