I have a theory about pumpkins and Halloween. Back in the old days, when people subsisted on the land, families lived on what was growing on the farm. That meant October was filled with a steady diet of pumpkin and other winter squash. If a hard-working farmer was forced to eat pumpkin every night for a month, I can see why he might take great pleasure in plunging a butcher knife into one and carving it into a spooky decoration to scare small children for Halloween.

For this recipe, roasted pumpkin is the star of a feast featuring a spicy soup and flat bread which includes spinach and ricotta cheese. The soup is smokey with cumin. The heat is in the seeds that are sprinkled on just before eating. I wasn’t thrilled with this flat bread when I first tasted it. But, other than spaghetti squash, I have never really liked any of the winter squash varieties.

It was when I witnessed my niece slurp chunks of pumpkin off her slice – like a shop vac picking up gravel – that I decided to use it. She and my Mom loved it. If you like pumpkin, you’ll like this. I call this flat bread and not pizza because it contains no sauce and pizza crust was just the easiest option to deliver the toppings. I could have used a number of different breads to the same effect. (For the newspaper version of the column I did call it a pizza.)

BEHIND THIS BITE
While I was making a recipe for spaghetti squash the week before last, I ate it 4 days in a row. I was really tired of it to say the least. My opening thought about pumpkins and Halloween and taking pleasure in carving a pumpkin is what popped into my head. I wrote it down, like I do when any peculiar thought comes to me, something I started doing while I was a working stand up comic. When I started to think about what I was going to make for this week, I decided to incorporate pumpkin. I created this pumpkin feast because of a quirky paragraph I wrote the week before. Ironically it was inspired by another member of the winter squash family. Sounds crazy but here we are. 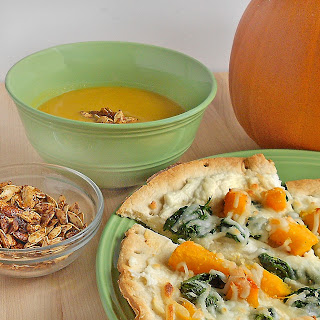 I really had never made anything with pumpkin before.

I started by roasting it al dente. I knew that I would be applying heat again to it, so I didn't want it to be complete mush when I pulled it from the oven. The first batch I roasted, I seasoned the pumpkin with different spices. I realized then that pumpkin itself is an acquired taste and, unlike beer, I hadn't really acquired a taste for it. The spices didn't help. The second batch I seasoned with olive oil, salt and pepper and went from there.

For the soup, I was inspired by potato-leek soup. I replaced the potato with pumpkin. I start with the smokey flavor of bacon and end with the compliment of cumin. The seeds feature smokey chipotle and contain the zing for the dish. If I made this again, I would serve it as a shot with the seeds going on right before it is consumed. I could see this as a gourmet appetizer for a fall party.

For the flat bread, I choose to compliment the rich and creamy flavor of pumpkin with ricotta cheese and spinach - and it worked. As I mention in the introduction, I just don't care for the flavor of pumpkin. The soup features bolder flavors that mask it, the flat bread is all about pumpkin. I really thought my efforts were a bust until other family members – who happen to love pumpkin – couldn't get enough of it. The recipe wasn't bad, it was my dislike of pumpkin that soiled it. I rarely eat pumpkin pie at Thanksgiving and have only ever enjoyed the seeds. The soup I would make again for myself, but I'll never crave the flatbread. I would make it for my family but, if I were to make it for myself, I would replace the pumpkin with artichoke and shower it with some fresh grated ... oh wait, that's for another post.

Justin, whoa... that's a feast all right! Thanks for popping over to link in.