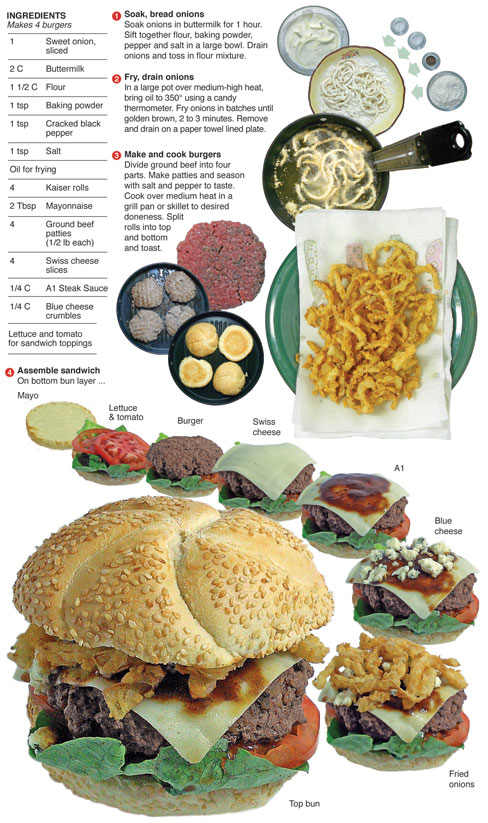 While watching football a couple weeks ago, I saw a commercial for Hardee’s and Carl Jr’s new Six Dollar Steakhouse Thickburger. According to the ad, the sandwich was created by Hamblor, god of hamburgers. He has the power to shoot french fried onions from his hand, rides a giant saint bernard that carries a keg of A1 steak sauce around its neck and he is flanked by beautiful goddesses that seem to love eating massive burgers. Laughing hysterically at this divine commercial, I made a pilgrimage to get one.

After devouring this glorious celebration of beef and bun, I knew it was my earthly duty to recreate it. What make this sandwich stand out is the french fried onion strings that give the burger a nice crunchy element. Also, blue cheese crumbles work surprisingly well with the tang of A1 sauce. I’m confident Hamblor and his goddesses would agree that this homemade version is far superior to the one prepared in a flurry at the chain store. 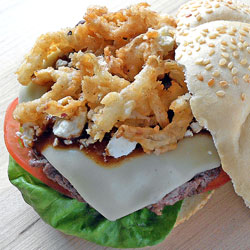 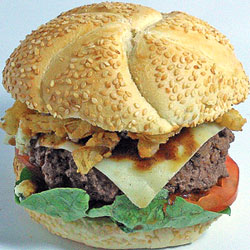 BEHIND THIS BITE
Had the Catholic church presented such holy visions as Hamblor and his busty goddesses as part of sunday school growing up, I would have been valedictorian of St. John Bosco's confirmation class in 1988. But that is exactly what the add is targeting – Guys. Guys 18 to 34 to be specific. That's the demographic Carl Jr's. and Hardee's market their food too.

In the past, they have used scantily clad celebrities such as Kim Kardashian, Paris Hilton and Audrina Partridge to sell their food. In 2005, Carl Jr's created an uproar with an add that featured a provocatively dressed Paris Hilton washing a car and eating a Spicy BBQ Six Dollar Burger. It created such a frenzy when it was released that a company-made mini-website featuring a longer ad billed as to racy for television crashed for nearly 4 hours do to heavy traffic it was not equipped to handle.

I learned all of this after I ate and recreated the burger. I went and bought two of these sandwiches. One to eat, and another to take apart and study for the purpose of this post. The Steakhouse Thickburger was made for men – Complete with an ad campaign featuring a Hamburger god flanked by gorgeous women indulging on it.

This is a true Man Bite.