I love meatballs. They are versatile and unique to the individual that makes them. The Oxford Companion to Food by Alan Davidson sums up meatballs the best, he says, There are “many manifestations around the world of this item, which is essentially minced meat (of any edible animal) formed into a ball and cooked in various ways.” I like the “any edible animal” phrase. Makes me wonder if an explorer in Antarctica has ever tried to make meatballs out of penguin.

For this recipe, I use lightly sautéd vegetables to add an extra layer of flavor to the meatball instead of herbs or spices. The light cooking will remove the raw flavor. When raw garlic is added to a meatball mixture it can take over and turn it into a garlic ball. (same is true with meatloaf) These meatballs are browned in a skillet before finishing in the oven so that they have a nice crust on the outside. I served these individually with a simple marinara sauce. They work as a snack for a party or as a center piece of a family meal.

BEHIND THIS BITE
I generally try to avoid doing a recipe for sandwiches in consecutive posts. I had originally planned to make a pasta and meatball dish as the second part but I could not resist. I have a special place in my heart for meatball subs. (here I call it a boat – more on that later) 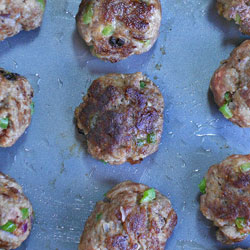 I went to visit Ball State University in the Fall of 1992 for orientation. I had been accepted for the spring semester and was summoned to get all the paper work finalized and see the beautiful campus located in Muncie, Indiana. It was my first glimpse of the place where I would spend the next four and a half years, earning a bachelors degree with two majors, journalism and history.

On that rainy fall day, I ate lunch at Subway. I ordered a Meatball Marinara Sub and proceeded to slop it all over my sweatshirt. Unscathed by the mess I had made of myself, I got my paperwork finished, toured the campus and got completely fired up to get started and join the group of people that will always be able to say they "went away to school." Everytime I eat a meatball sub it reminds me of the adventurous kid who took a chance and left the security blanket of home. Funny how a certain food or meal can remind you of such specific things in the past.

One thing I don't like about meatball subs is the mess. That is why I hollowed out a hoagie and stuffed it rather than cut it in half. It made for a much easier sub to devour - which I did in about three bites!