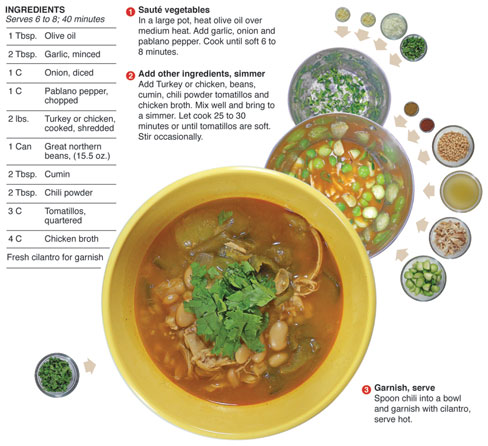 While I lived in New York, I always volunteered to work for Thanksgiving. That way I would be guaranteed to be home for Christmas. A few years ago, I began having my own Thanksgiving party the Saturday after for all of my friends who were also away from their families for the holiday.

The first year I cooked a whole turkey and had lots of side dishes. A lot got eaten, but it seemed like I had enough leftover to feed half the homeless people in the borough of Queens. Each year I cooked less, but I always had a refrigerator full of leftovers after the party. That’s when I realized they are just part of the holiday tradition –  along with storming through the doors of a department store at 3 a.m. on  black Friday.

For this recipe, I make chili from leftover turkey, chicken can be used just as well. Instead of traditional tomatoes and kidney beans, I use tomatillos and great northern beans for flavor and appearance. It’s a great dish to warm the belly and use up some of those Thanksgiving leftovers. 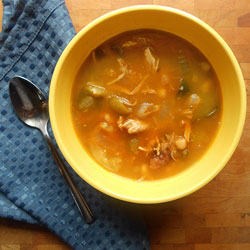 BEHIND THIS BITE
My sister has been making a version of "white chili" that is absolutely delicious for some time now. She makes it with chicken and white beans. This recipe was inspired by her recipe, turkey, like chicken, is a delicate meat that will take-on what ever flavors it's surrounded by. It's like a culinary canvass for a cook to paint flavors on. Rather than making turkey sandwich after turkey sandwich, this dish will rid the fridge of that pile of turkey in one fell swoop – And you'll hardly notice your eating turkey because it will take on the bold flavors of the chili.

Now that all that turkey is gone, it's time to start thinking about what to make for Christmas!

Posted by behindthebites@gmail.com at 1:53 PM