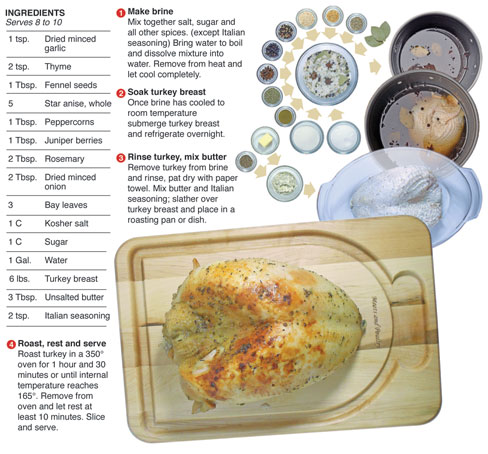 It’s commonly believed that the first Thanksgiving was celebrated in Plymouth colony by the pilgrims and Native Americans in 1621, but similar celebrations occurred before in Jamestown and the feasts were not held on an annual basis.

Thanksgiving wasn’t an official holiday until 1863, when Abraham Lincoln designated the last Thursday of November as a “national day of thanksgiving.” He made the declaration after key victories of the Union army in the Civil War at Vicksburg and Gettysburg. Since then every president has declared Thanksgiving a national holiday.

For this recipe, I have prepared turkey, the traditional centerpiece of the Thanksgiving meal. For flavor and moisture, I soak a turkey breast in a salt brine overnight. The brine will lock in moisture and infuse the meat with the flavorful spices included in the mix. The use of a meat thermometer is also essential, the turkey is cooked to perfection when the internal temperature of the thickest part reaches 165°. 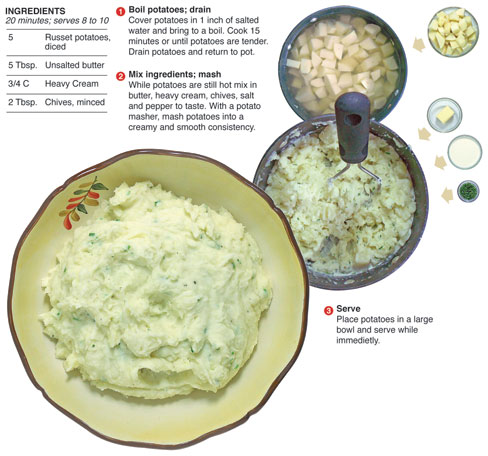 No Thanksgiving dinner can be complete without mashed potatoes. For this version, I went for creamy and smooth. What does that really mean? Lots of added fat! Heavy cream and butter make these potatoes rich and decadent. The chives add a hint of onion.

This is the way I expect mashed potatoes when I order them at a nice restaurant as a side to a cut of meat or some other star on the plate. Just a nice flavorful side of potatoes. Usually, I like to add cheese, bacon bits or a more fragrant herb like rosemary or thyme. But those flavors appear elsewhere in this Thanksgiving feast and that's what makes this version so good – it's just about the potato! 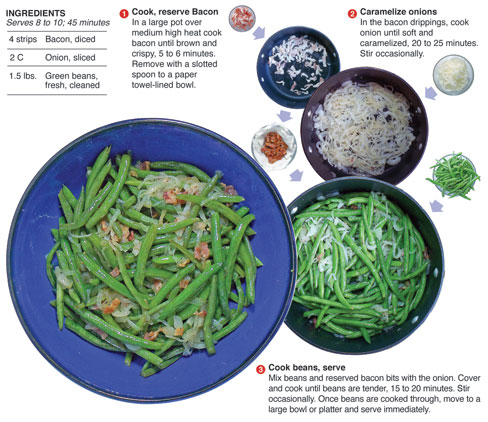 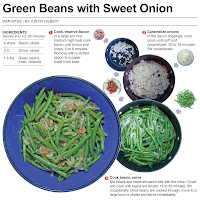 I bought these beans fresh the night before cooking this feast and when I cleaned them the next day I decided to leave them long and intact, rather than cut them into thirds. This choice made the final product a different experience when it came to consuming. Instead of stabbing at a pile of beans with my fork and getting 4 or 5 bean chunks on it before taking a bite, I was just fishing for one at a time, much like the way I eat asparagus. It was a different and welcomed change. I also left the beans slightly crunchy. It made for a nicer texture and gave this side a savory salad feel. 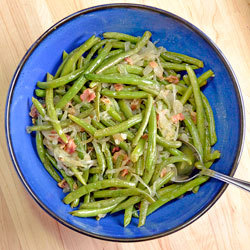 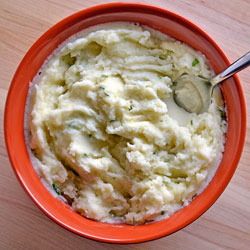 The other two elements in this dish put this one out of the park. Smoky bacon and sweet caramelized onions. Need I say more? Well yes, I need to say just a little more – the sweet onions and smoky bacon act as a smoky and sweet dressing to the beans. The bacon provides the salt in the dish, a little pepper can be thrown in if desired. The crunchy, al denté-cooked beans are the star here and the other two ingredients come along for the show, providing small hints of extra flavor.

The green beans (minus the bacon) look delicious. I always over cook mine.