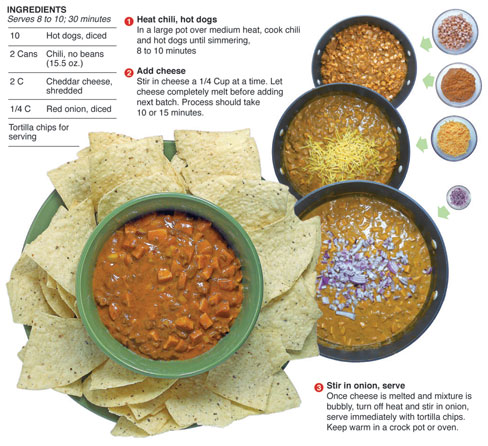 Looking at this dip will add calories. It's the Medusa of all party dips. Weight Watchers wants me arrested for creating this culinary monster that registers a colossal 13 points per serving. I would recommend eating this guilty pleasure no more than twice a year – unless your immune to all the bad stuff contained in unhealthy food or you just flat out don’t watch what you eat.

Why would I create such a culinary beast? It’s ridiculously tasty. Consider it a special dish for a special time. Make it for the most cherished occasions – weddings, child births or an NFL football game.

For this recipe, I take everything that is wonderful about chili dogs and transform it into a dip. It can be served on a bun, but here it’s delivered on a tortilla chip. This dish will satisfy even the strongest cravings for chili dogs - which I am prone to for some mystical reason. After eating a large helping of this creation, I suggest spending the next three days on a raw vegetable diet or training for a triathlon just to compensate. 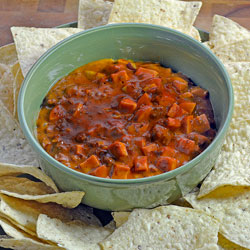 BEHIND THIS BITE
I love chili dogs. I wish they weren't so bad for you. In the past I have craved them after a late night of drinking. It's almost as if my body says "well after what you did to me last night, you might as well fill me up with the most unhealthy thing you can find." I like to top my chili dogs with shredded cheddar cheese and raw onion, which I incorporate here. The cheese and chili bring this dip together, much more is needed of the two in this dip than what is needed when eating a traditional chili dog. Usually the chili, cheese and onion are a compliment to the dog. For this dip, it is the opposite. The chili and cheese are what binds everything together to form a dip that will be easy to grab with a chip.
I made this dip to take to my cousin's birthday party. I decided to share it with my Mom and Dad before I went to the party. Mom got a taste and so did I. I then left a huge portion out in the kitchen that I thought I would put back into the pot I had made for the party. When I went to retrieve it before I left Mom and Dad's for the party, I noticed Dad had destroyed the entire bowl. Next time I decide to let Dad test out a guilty pleasure like this, I will be sure to leave just a small portion so there isn't as much to tempt him to over-indulge.