A Burrito for Breakfast 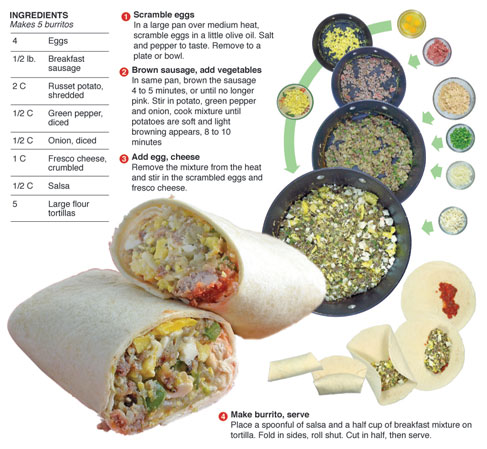 The first time I ate a breakfast burrito was at McDonald's after they were added to the menu in 1991. I thought they were great from the beginning and it is the item I choose most when I start the day with breakfast at the golden arches.

A friend of mine used to eat them everyday. He would order from the drive-thru, get three breakfast burritos and devour each one like a maniac in three bites. I wondered if he was secretly training for a burrito eating competition.

For this recipe, I make my own version of a breakfast burrito. These are much bigger and hardier than the diminutive snacks sold at McDonald's, and will take more than three bites to eat - unless your an NFL linemen. The burrito filling features shredded potato, fresco cheese and other traditional breakfast ingredients. The potato gives it a stick-to-your-ribs quality and the fresco cheese (labelled "queso fresco" at the supermarket) provides a fluffy compliment to the egg, and is similar in texture to feta cheese but very mild in flavor. 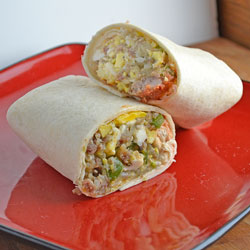 BEHIND THIS BITE
The friend that I mention in the intro – who ate McDonald's breakfast burritos in three bites – had another interesting fast food quirk. He never went into fast food restaurants when he was by himself. He would order at the drive-thru, then pull into a parking spot and eat in his truck.

I always thought that was odd.

At the time, he and another guy I hung out with, were what I called "eat in the parking lot alone guys" (with mullets) I used to poke fun at them because of it. (the eating habits, not the hair-do) I hate to eat in my car. Some people do it all the time, but for me, I'd rather slop my Big Mac special sauce all over a table I don't have to clean, rather than the steering wheel of my Honda Civic.

I can understand though. Some people don't want to sit in a public place alone and eat. It's an insecure thing. Kind of like people who can't drive twenty minutes by themselves in a car without calling every person in their contact list – just so they don't appear to be alone or without friends.

I haven't spoke to the three-bite-burrito-eater in years, I moved to New York and he to Utah. Last I heard, he married a woman named Tangerine. I hope he is doing well because he was a good guy, and a great friend at the time - even though he ate in the parking lot like a wanted criminal afraid of being recognized while eating lunch at a fast food joint.

I'd like to point out, that I eat fast food alone in my car, and I'm NOT insecure. If you don't understand it, don't judge it.

I make my breakfast burritos in almost the opposite order: I saute all of the veggies/meats, then pour the eggs on top, scramble it all together, then top with shredded cheese. Sort of like a badly made omelet of sorts. Everything stays together well, making it easier to roll into a tortilla.