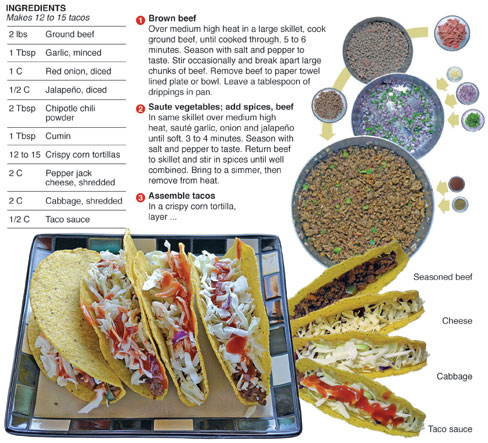 There are many ways to make tacos but I tend to break them down in two ways. The first, which is more authentic to Mexico, is putting most of the effort into a salsa, which will contain all the chili and seasonings that make the taco yummy.

The second way, or what I call the American way, is to put the spice and seasoning into a meat mixture. Most Americans making tacos at home buy a kit that comes with a seasoning packet, tortillas and a sauce. The seasoning packet is stirred into the meat with water and simmered until thick. The flavor that the packet provides is easy to replicate with a few items from the pantry. 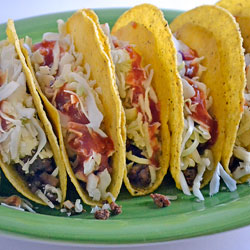 For this recipe, I make tacos the American way, and instead of a packet, I make my own seasoning blend featuring chipotle chili powder, cumin and a few fresh ingredients. It provides the taco with a flavor the packets can’t compete with. To finish this bold and spicy taco, I add pepper jack cheese, cabbage and hot taco sauce for little extra kick.

BEHIND THIS BITE
These tacos make Taco Bell spicy seem like baby food. It's a taco for people who love heat. I like spicy food, the key to eating it and not regretting it, is to limit the amount of spice you ingest. These tacos are perfect for lots of heat. Most of the fire is contained in the meat mixture and you don't need to stuff the taco full with it. A little bit will go along way. I ate four with no side affects. 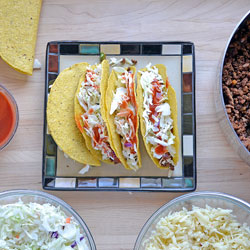 My mom saw the recipe in the paper and she was surprised that I didn't mention how hot they were. I told her that labeling the taco as "spicy" should be enough. You either like the heat or you don't.

I have watched cooks on the food network dice up habanero peppers and toss them into salsa raw. That is hell fire heat. I don't know if the cooks actually test or eat all the dishes they are presenting on TV, but to dice up a habanero pepper and throw it into salsa like a jalapeño would make it so hot that 98 percent of the people who consume it would be miserable for twenty minutes from one bite. These tacos are far from that kind heat, but they are spicy - in a good way.

HABANERO HELL FIRE SALSA
A friend of mine had a big party a couple of years ago and she asked me if I would be in charge of the food. I made a number of gourmet pizzas and had a salsa bar set up for snacking. Near the end of the cooking, I made one final salsa for people to try. It was a pineapple-habanero salsa that was absolutely mind blowing. I warned all who I presented it to that this would be the hottest salsa they would ever eat.

I wanted the salsa to be that of legend. Years from now, when people are telling stories of "that was the hottest thing I've ever eaten" I was hoping they would have my salsa as their story. I warned people and personally escorted the bowl around. About half the people tried it and most agreed that it was the hottest thing they had ever eaten. There was milk and most where able to extinguish the flames with it.

I should have thrown the salsa out after the taste test but I put it on the salsa bar and started to mingle. I had been cooking all day and it was time to party. Later on that night more revelers showed up, the people who had been there were talking up the pizzas and salsa, which prompted most of the new patrons to go get samples.

It wasn't long before a woman came over to me raving mad. She said "Why would you make something like that! It ruined all the other great food! MY GOD! What was in the pineapple salsa!" I told her I was sorry and went to get her some milk to put out the fire.

One problem. All the milk was gone.

There were a number of people suffering from the salsa, and I had nothing to extinguish the fire besides beer. It wasn't long before I witnessed someone grab a bottle of french vanilla dairy creamer from the fridge and down it.

It was time to throw out the hell fire salsa.

It's one thing to know what you're about to eat is mind blowing hot. It's another thing to walk by a table, grab a tortilla chip, and get a mouth full of volcanic lava intended to be the hottest thing you would ever consume – without knowing it!

I have retired the pineapple-habanero salsa for now, but maybe I should make a one more batch just to post here on the blog.