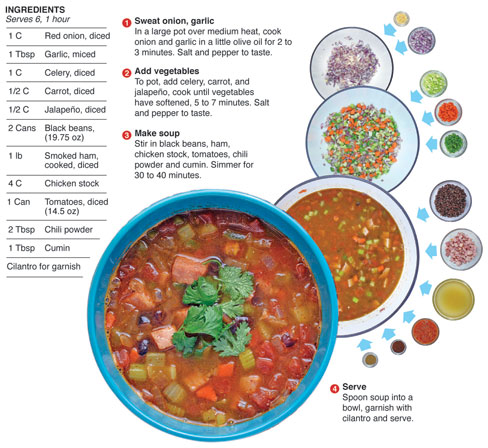 Black beans are used in soups, stews and a variety of dishes and are most common in South America, Mexico and the Caribbean. The black bean was once used for a very macabre purpose in an incident when Texas was an independent republic in the 1830s and 1840s.

According to the Texas State Historical Association, a number of Texans had been captured by the Mexican Army in December of 1842 and were being marched to Mexico City. In February 1843, many escaped and within a week, 176 of the men were recaptured. The Mexican army decreed that 1 in 10 would be executed. 176 beans were placed in an earthen vessel. 159 were white beans, and 17 were black. Each of the fugitives were ordered to pick a bean. Those who picked a black bean were put to death by firing squad in what is known as “The Black Bean Episode.”

For this recipe, I use black beans in a nicer way. They are combined with other ingredients in what is known as “Southwest Black Bean Soup.” 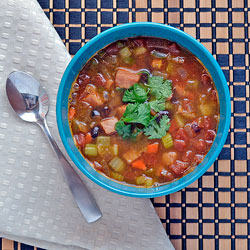 BEHIND THIS BITE
This is my favorite type of recipe to create for my food column. It's a one pot dish and, most important, the black bean has an interesting story. I had completed all the documenting and design and through research I stumbled upon "The Black Bean Episode." I like telling my personal stories about dishes when it is pertinent to the recipe, but a history lesson is my favorite kind of story to tell.

The dish itself is a soup that is seasoned similar to chili. In fact, my Mom thought it was a chili when she first tried it. I call it a soup because that is how I built it. It is a cross between the two though - I guess you could call it a chiloup, or maybe even a sili.

My family love soup dish. This soup looks delicious. I should try this at home.